Family's home is vandalized and police have no suspects. Unfortunately, this being Cuba and one of the victims living in the home an independent journalist, Luis Rojas, government agents ( including the police) are themselves suspects. Below is a repost of Luis's blog entry on what happened. Marc Masferrer of Uncommon Sense has also reposted it. 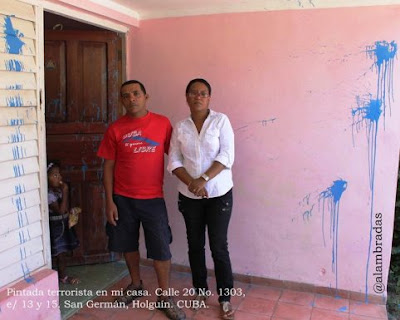 
This happened last night in my house. “Anonymous” did it. The police, which is so effective when it comes to arresting free-thinkers and beating defenseless men and women when they go out to the street to scream FREEDOM, did not find the culprits.

I wasn’t in San German and when I arrived this morning I found this. I couldn’t put it on my Twitter account or send a picture via Twitpic because the service on my cellphone has not been re-activated. I prefer not to fall into the thievery of CUBACEL which, during these days, has robbed me of SMS and photos in my @alambradas account.

A friend of mine lent me his cellphone and, thanks to him, I was able to send an email to another friend with this photo and this note, so that it be published on my blog or wherever else possible.

That’s how internet without internet works from San German, Holguin.