The Castro regime is consistent on human rights. They're against them. 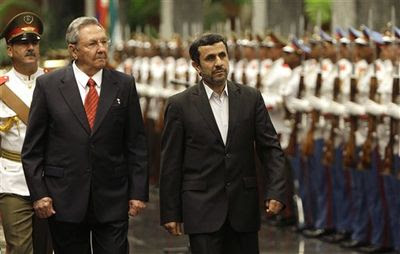 Raul Castro and Mahmoud Ahmadinejad, January 11, 2012 Photo by Associated Press
The visit of Mahmoud Ahmadinejad to Cuba on the tenth anniversary of the opening of the Guantanamo Naval Base to detainees from the war in Afghanistan serves as a double reminder on the Castro regime's support for systematic human rights violations. 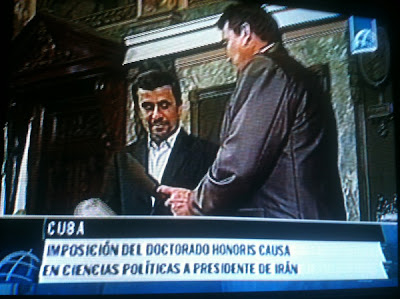 Awarding of Honorary degree to Ahmadinejad broadcast on official TV. Photo by Yoani Sanchez
Yesterday, Mahmoud Ahmadinejad who represents a regime that murders its own citizens, denies the Nazi holocaust of the Jewish people and the existence of homosexuals in Iran was presented an Honorary degree from the University of Havana and was invited to make a speech there where he denounced capitalism.

No one should be surprised because it is just the latest chapter in a long history of embracing tyrants. What should be surprising is that the same regime in 2002 welcomed the opening of the US prison camp in Guantanamo. 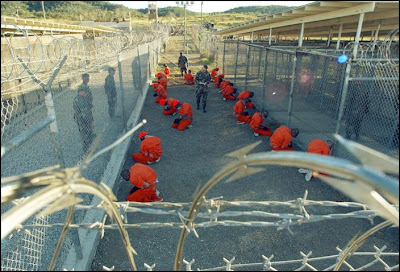 Guantanamo prison camp
On January 12, 2002 the Cuban Communist Party's daily newspaper Granma offered the official position of the dictatorship on the prison camp in Guantanamo: "We will not create any obstacles to the development of the [U.S. military] operation, though the transfer of foreign prisoners of war by the U.S. government to the base—located on a space in our territory upon which we have been deprived of any jurisdiction—was not part of the agreement that the base was founded upon."

The first Cuban to criticize and denounce the United States for housing Afghan prisoners in Cuba and demanding they be treated with dignity was Cuban opposition leader Oswaldo Payá Sardiñas on December 17, 2002:

It's obviously a matter of shame that our land is being used for that purpose, having foreign prisoners brought to Cuba. Even if they are terrorists they deserve respect. Their human rights should be respected.

The Castro dictatorship has been a steadfast apologist for systematic human rights violations not only with friendly regimes such as China, Venezuela, Syria, Libya, Ethiopia, Sri Lanka and Iran but also with adversaries such as the military junta in Argentina and in the beginning with even the United States over Guantanamo.

It can truly be said that the Castro regime in Cuba has two consistent universal enemies: human rights and the rule of law and one consistent ally: tyranny. Some would ask but what about social and economic rights? What about the healthcare system in Cuba. It is a two tiered system that offers little to the average Cuban and everything to a privileged few and tourists who can pay.

Ten years later Oswaldo Paya is criticizing the honoring of Mahmoud Ahmadinejad and denouncing both his antisemitism and brutal human rights record:

Tyrant lizard on the hill. Currently Ahmadinejad speaks at the University of Havana. It is an insult to the students and an outrage to the sacred remains of Father Varela and against the virtue and the homeland of the Cubans

Mahmoud, why do you deny the Holocaust? Would you repeat it? Never again against any people.

In solidarity with and in the memory of Neda and the other young Iranians murdered in Iran by Mahmoud Ahmadinejad and his regime.
Posted by John Suarez at 6:10 AM