Resisting humiliation and defending dignity in totalitarian CubaOther famous men, those of much talk and few deeds, soon evaporate. Action is the dignity of greatness. - José Julián Martí Pérez

This morning shared a conversation/panel at the launch of the Roots of Hope event "Avenida Cuba" at Miami-Dade College Wolfson campus with Cuban rapper Yrak Saenz, a skater named Rene and discussed music, culture and civic movements. Before participating on the panel also listened to a Cuban artist named David D Omni visiting from the island who spoke of Satyagraha and living in truth. Had never met any of them before. Prior to the start of the conversation I distributed the World Youth Movement for Democracy statement on the death of Cuban prisoner of conscience Wilman Villar Mendoza. Focusing on Cuba and Cuban civil society through a social-cultural focus is an enriching experience that led to the following reflection and much of it ended up in the presentation made by yours truly today but what follows, hopefully, is a bit more developed.

Wilman Villar Mendoza, a member of the opposition group Union Patriotica de Cuba, was detained after participating in a nonviolent protest in Contramaestre,Cuba on November 2, 2011. He was sentenced to four years in prison following a trial on November 24, 2011 that lasted less than an hour in which there was no due process he was immediately taken to Aguadores prison. Wilman began his hunger strike to protest his unjust trial and imprisonment that same day. Cuban authorities transferred him to a punishment cell without clothes or water in an effort to break his spirit and force him to end the hunger strike.

It was only when Wilman's health failed and it looked like he would die that prison officials transferred him to a hospital on January 15, 2012 (63 days after he had initiated the hunger strike). Wilman Villar Mendoza died four days later at 6:30pm on January 19, 2012 at the age of 31. He left behind a wife and two daughters ages 5 and 6.

Why would a young man with a family give up his life in a protest over an unjust four year prison sentence? Imagine for a moment that you have participated in a nonviolent protest and a day or two later someone comes to your door and arrests you. In a sham trial that takes less than an hour you are sentenced to four years in prison.

Think about it: four years in prison for exercising a fundamental human right. 1,460 days in prison separated from your family and housed with violent common criminals for carrying the Cuban flag in a nonviolent protest demanding a better life for Cubans with more freedom. 35,040 hours in a dark, filthy and dank prison cell to reflect on this outrage. Cuban prisoners of conscience arrested in 2003 spent more than double that time in prison. One of them Orlando Zapata Tamayo also died on a hunger strike on February 23, 2010 protesting his unjust imprisonment and mistreatment by prison authorities.

It is not just a Cuban phenomenon.

A fruit vendor, the Tunisian, Mohamed Bouazizi, doused himself with paint thinner and lit a match on December 17, 2010, setting himself on fire in front of the local governor’s office after the authorities confiscated his fruit, beat him and refused to return his property. His desperate act set off street clashes that ultimately toppled the country’s autocratic ruler, but also brought down autocrats in Egypt and Libya while igniting mass protests that threaten the rule of autocrats in Bahrain and Syria.

It is not the first time that a young man has self-immolated himself to defend his dignity as a human being. 20 year old Czech student, Jan Palach set himself on fire, in Wenceslas Square, in Prague on January 16, 1969. He died three days later on January 19, 1969, but before he died he spoke to the doctors and nurses who cared for him about why he had set himself on fire. Jaroslava Moserova was a doctor on duty when Jan was rushed into the hospital and still remembers what he told her:

"It was not so much in opposition to the Soviet occupation, but the demoralization which was setting in, that people were not only giving up, but giving in. And he wanted to stop that demoralization. I think the people in the street, the multitude of people in the street, silent, with sad eyes, serious faces, which when you looked at those people you understood that everyone understands, all the decent people who were on the verge of making compromises."

What drove these men to acts of self-immolation? They were acts of defiance against not only their personal humiliation but in defense of the collective dignity of a people. Because despots know that such an act of desperation and outrage over a profound injustice can resonate with a populace and end their rule that regime's fear them, even posthumously, and attempt to slander their memory.

Vaclav Havel, the Czech playwright, dissident, and future president wrote about the impact of the daily humiliations that exist in a totalitarian regime in a 1975 open letter to Dr. Husak, the General Secretary of the Czechoslovak Communist Party at the time:

If every day someone takes orders in silence from an incompetent superior, if every day he solemnly performs ritual acts which he privately finds ridiculous, if he unhesitatingly gives answers to questionnaires which are contrary to his real opinions and is prepared to deny himself in public, if he sees no difficulty in feigning sympathy or even affection where, in fact, he feels only indifference or aversion, it still does not mean that he has entirely lost the use of one of the basic human senses, namely, the sense of dignity.

On the contrary: even if they never speak of it, people have a very acute appreciation of the price they have paid for outward peace and quiet: the permanent humiliation of their human dignity. The less direct resistance they put up to it comforting themselves by driving it from their mind and deceiving themselves with the thought that it is of no account, or else simply gritting their teeth-the deeper the experience etches itself into their emotional memory. The man who can resist humiliation can quickly forget it; but the man who can long tolerate it must long remember it. In actual fact, then, nothing remains forgotten. All the fear one has endured, the dissimulation one has been forced into, all the painful and degrading buffoonery, and, worst of all, perhaps, the feeling of having displayed one's cowardice-all this settles and accumulates somewhere in the bottom of our social consciousness, quietly fermenting.

Clearly, this is no healthy situation. Left untreated, the abscesses suppurate; the pus cannot escape from the body, and the malady spreads throughout the organism. The natural human emotion is denied the process of objectivization and instead, caged up over long periods in the emotional memory, is gradually deformed into a sick cramp, into a toxic substance not unlike the carbon monoxide produced by incomplete combustion.

No wonder, then, that when the crust cracks and the lava of life rolls out, there appear not only well-considered attempts to rectify old wrongs, not only searchings for truth and for reforms matching life's needs, but also symptoms of bilious hatred, vengeful wrath, and a feverish desire for immediate compensation for all the degradation endured.

Wilman Villar Mendoza, Mohamed Bouazizi, and Jan Palach were three men who resisted humiliation and defended not only their own dignity but that of their respective countries. The uprisings in reaction to the death of Mohamed Bouazizi were almost immediate while in the case of Jan Palach took place twenty years following his death:

“On the 20th anniversary of Palach's death, protests in memory of Palach escalated into what would be called "Palach Week". The series of anticommunist demonstrations in Prague between 15 and 21 January 1989 were suppressed by the police. Palach Week is considered one of the catalyst demonstrations which preceded the fall of communism in Czechoslovakia.”

In the case of totalitarian regimes like Czechoslovakia and Cuba the damage to society is both widespread and profound. Totalitarian regimes by definition attempt not only to monopolize political life but all aspects of life. For example the arts and music are subjected to political control and widespread censorship. Although some of it may survive being circulated in the underground or on the black market the average citizen will be denied essential musical and artistic works based on political censorship.

In the case of Cuba, Eric Silva Brenneman reported in the book Shoot the singer!: music censorship today that "[b]etween the 1960s and 1970s, the island performed a cultural genocide the consequences of which are still difficult to calculate today," and how there is increasing concern within the international music community that post-revolution generations are growing up without knowing or hearing these censored musicians and that this could lead to a loss of Cuban identity in future generations.

In the case of Czechoslovakia that obtained in the Velvet Revolution of 1989 the aftermath exposed the societal harm from decades of totalitarian rule and were summarized by President Havel in his 1990 New Years Address:

We fell morally ill because we became used to saying something different from what we thought. We learned not to believe in anything, to ignore one another, to care only about ourselves. Concepts such as love, friendship, compassion, humility or forgiveness lost their depth and dimension, and for many of us they represented only psychological peculiarities, or they resembled gone-astray greetings from ancient times, a little ridiculous in the era of computers and spaceships. Only a few of us were able to cry out loudly that the powers that be should not be all-powerful and that the special farms, which produced ecologically pure and top-quality food just for them, should send their produce to schools, children's homes and hospitals if our agriculture was unable to offer them to all.

The previous regime - armed with its arrogant and intolerant ideology - reduced man to a force of production, and nature to a tool of production. In this it attacked both their very substance and their mutual relationship. It reduced gifted and autonomous people, skillfully working in their own country, to the nuts and bolts of some monstrously huge, noisy and stinking machine, whose real meaning was not clear to anyone. It could not do more than slowly but inexorably wear out itself and all its nuts and bolts.

When I talk about the contaminated moral atmosphere, I am not talking just about the gentlemen who eat organic vegetables and do not look out of the plane windows. I am talking about all of us. We had all become used to the totalitarian system and accepted it as an unchangeable fact and thus helped to perpetuate it. In other words, we are all - though naturally to differing extents - responsible for the operation of the totalitarian machinery. None of us is just its victim. We are all also its co-creators.

It is as if they had fallen into a deep sleep and only for the brave actions of a few who had awakened and shouted out for the others to wake up that the totalitarian nightmare finally ended in Czechoslovakia. Some of the screams, such as Jan Palach's immolation, were louder than the others. 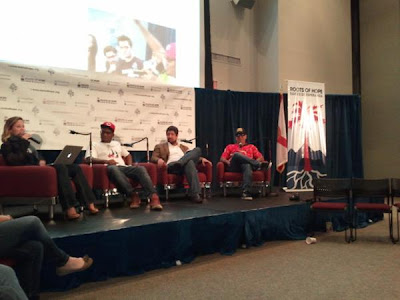 One of the speakers on Friday told me that the majority of the Cuban people are still asleep but that there was an active minority that was wide awake. Cuba's civic movements are at the heart of both the rebirth of pluralism and the regeneration of brutalized and damaged Cuban society. Some of the members of this movement like Pedro Luis Botiel, Orlando Zapata Tamayo and Wilman Villar Mendoza have shouted more loudly than others for the Cuban people to awaken. Their examples of resistance to the constant humiliations of the regime and their defense of dignity are the basis for a Cuban democratic awakening that will wash away a half century of totalitarian rule.
Posted by John Suarez at 7:03 PM