"I have learnt through bitter experience the one supreme lesson to conserve my anger, and as heat conserved is transmuted into energy, even so our anger controlled can be transmuted into a power that can move the world." - Mohandas Gandhi, Young India Journal, September 1920

"Since being in India, I am more convinced than ever before that the method of nonviolent resistance is the most potent weapon available to oppressed people in their struggle for justice and human dignity. In a real sense, Mahatma Gandhi embodied in his life certain universal principles that are inherent in the moral structure of the universe, and these principles are as inescapable as the law of gravitation." - Martin Luther King Jr.

Half a century after the January 30, 1948 assassination of Mohandas Gandhi by a Hindu extremist and thirty years after the April 4, 1968 assassination of Martin Luther King Jr, Gandhi's grandson, Arun Gandhi, began organizing an annual Season of Nonviolence that begins on January 30 and ends on April 4th. King was deeply influenced by Gandhi and in the video below he explains how Gandhian thought influenced him.


Martin Luther King Jr. speaks on how he became influenced by Gandhi's techniques

Both Gandhi and King have made a tremendous impact not only in their respective countries but around the world. In a real sense their legacies can be seen in the nonviolent movements confronting injustices around the world.

“[A]lthough Cubans are living in a society of fear, the opposition democrats have adhered to and consolidated in the principles of nonviolent civic struggle. The theories of Henry Thoreau, Mahatma Gandhi, Martin Luther King Junior and Gene Sharp, considered by the regime as subversive books, are the guide of this nonviolent resistance movement.”

Dr. Biscet is one of the many followers of Gandhi and King making a difference around the world. Aung San Suu Kyi, who is currently carrying out a nonviolent struggle following the Gandhian tradition, is changing both Burma, her homeland, and the world. In the video below she speaks out on the impact of nonviolence and Gandhi on the movement in Burma.

We are convinced that the non-violent approach is the best. We are convinced that in the long run it pays off, even if over time it is actually longer, because it is a non-violent approach. For example, if we consider a country like India, which was very much influenced by Gandhiji's non-violent philosophy, you can see how clear the military has kept away from politics. India has had many, many political upheavals and it has faced many problems, and it probably will have many problems to face in the future, but I think the seed of non-violence that was planted before independence has helped them a great deal in resolving their problems in as democratic a way as is possible under the circumstances. So we want to keep to the non-violent approach.

Another who changed the world and passed away on December 18, 2011 was Vaclav Havel. Havel was an admirer of Gandhi. On February 8, 1994 in New Delhi while accepting the Indira Gandhi prize Havel outlined Gandhi's influence on him:

“I am one of Mahatma Gandhi's admirers, and, if I may be so bold, I believe that a reflection of his life's work might even be seen in the attempt my friends and I made, in Charter 77, to create a nonviolent opposition to the totalitarian regime in our country. This aspect of our activity later had a positive influence on the course of our anti-totalitarian revolution in 1989.” 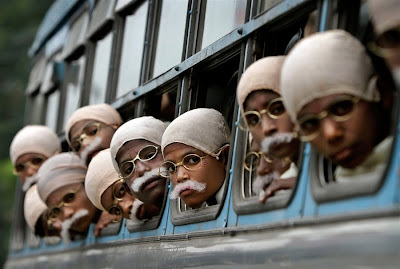 Underprivileged Indian children dressed to look like the late Mahatma Gandhi arrive on a bus in Kolkata, India, before attempting a world record for being the largest gathering of people dressed as Gandhi, Jan. 29. Bikas Das / AP

The 15th Season for Nonviolence begins tomorrow on January 30, 2012 and there are activities being organized around the world. There is still time for you to organize something in your own community to defend, promote and work towards living in a nonviolent way in your own corner of the world.
Posted by John Suarez at 9:49 PM