Václav Havel: Christmas is the holiday of the advent of hope to this world.

On December 18, 1999 Václav Havel presented a Christmas tree to His Holiness Pope John Paul II and made the speech reproduced below. Twelve years later to the day on December 18, 2011 Havel passed away. Nevertheless it remains as relevant today, despite all that has happened since then, as it was 13 years ago. 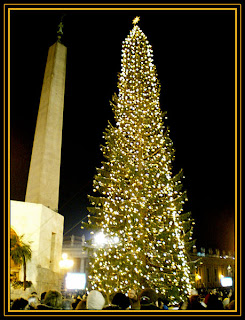 Speech of President of the Czech Republic Václav Havel on the occasion of the presentation of the Christmas tree for St. Peter's Square to the Holy Father, John Paul II
Vatican, 18 December 1999

It is a great privilege to be able to present , on behalf of the Czech Republic, to the Vatican and the city of Rome, a Christmas tree which will stand this year on this famous square, and to be able to greet you all from this site.

It is also a great privilege for the Czech Republic and all its citizens, irrespective of their denominations, that it has been namely our country which was asked to decorate this place at Christmas at a time when we are all preparing for the advent of the jubilee Year 2000.

Since ancient times jubilee years have traditionally served as an appeal for reflection and reconciliation. I have deep respect for the persistent effort of the Holy Father to have this dividing line of epochs inscribed by the Catholic Church and, generally, by all people of good will into the history of the world as a time of universal reconciliation, reconciliation of nations, cultures, spheres of civilization, and thus, especially, as a time of new and better mutual understanding between followers of different faiths.

For a long time I have been deeply convinced that the good future of this civilization depends on how well and how quickly is mankind able to find and understand again the absolutely fundamental spiritual values and principles common to all religions. We all know what they comprise: respect for the miracle of creation, of the creation of the world, Nature, life, and the human being, as well as respect for the moral order growing out of this miracle. I am sure that without the restoration of these values mankind would hardly be able to face all the threats looming over civilization.

People, simply, should not focus so much on what makes their spiritual traditions different, but much more on what they have in common and what is being revealed today by the dialogue between various religions.

I am convinced that if we were to descend to the very depths of our diverse traditions, we would start finding common roots and perceiving them much more strongly as merely different branches of the same tree. A tree of certainty that all that is has its source, its order, its inspiration and its memory beyond us and above us.

I shall be happy if the Christmas tree which I have brought from the Czech Republic could symbolize, amongst other things, the spiritual reconciliation between the different branches of human spirituality based on the awareness of their common trunk and common roots.

This tree grew in a country which used to be depicted on ancient maps as the heart of Europe, and now it will light up in the city which used to be considered Europe's head. It would be wonderful if it could also remind us that the spiritual reconciliation and spiritual rebirth, to which we attach our hopes at the divide of epochs, must grow from harmony between head and heart.

Christmas is the holiday of the advent of hope to this world.

Let the coming jubilee year bring all people of good will new hope that the human family will, after all, find a way of averting the dangers which it is inflicting upon itself.

I greet you, I wish you a Merry Christmas, and, especially, peace with the world, with Nature, with your brothers and sisters and with yourselves! 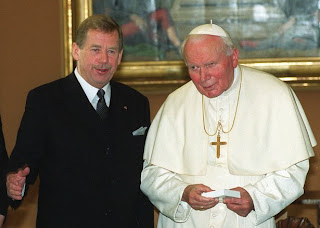