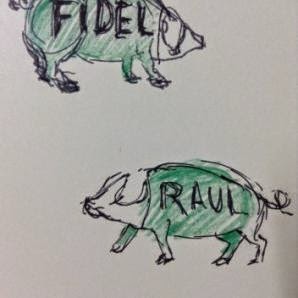 On February 5, Lia tweeted that messages sent via this e-mail or in comments left on this page would reach him in prison. A month earlier on January 4th, Lia Villares tweeted an image of El Sexto" with a signed text that read: "To beat me you need arms, police, prisons. For me to beat you I only need spray paint and this little paper. - El Sexto".

Uncommon Sense on January 22, 2015 offered an overview of the December 26th detention of Danilo Maldonado and the privations that he continues to suffer including now serious health concerns:


Despite the recent giddiness by some about Cuba, there remain in the Castro gulag numerous political prisoners, including at least one -- Danilo Maldonado -- arrested after the Dec. 17 announcement by President Barack Obama that the United States and Cuba were well on their way toward normalized relations. Maldonado, a grafitti artist better known as "El Sexto," was arrested Dec. 26 while driving two pigs to a Havana park. In Cuba, where pork for the masses is scare, that he had two pigs is probably a crime in itself. But El Sexto's worse transgression is that he had painted on the pigs the names "Fidel" and "Raul," and that they were to be used in performance piece.


Police charged El Sexto with "insulting" and threw him in jail, where he remains while awaiting trial. Laritza Diversent, a dissident lawyer, tried to win El Sexto's release by filing a writ of habeas corpus arguing that El Sexto had been arrested aribitrarily. Also, she wrote that "Fidel" and "Raul" are common names and anyway, the government should not be so sensitive to criticsm. Officials rejected her arguments. Meanwhile, Diario de Cuba and other sources reported Wednesday that El Sexto has developed pneumonia and is not receiving needed medical care.