Full page ad published in The Washington Post today February 11, 2015 by prominent diplomats, businessmen, academics, and Cuban opposition leaders calling on Congress to oppose unilateral concessions to the Castro regime and criticizing the Obama administration's actions on Cuba. If you would like to add your name click on this link and fill out the form. 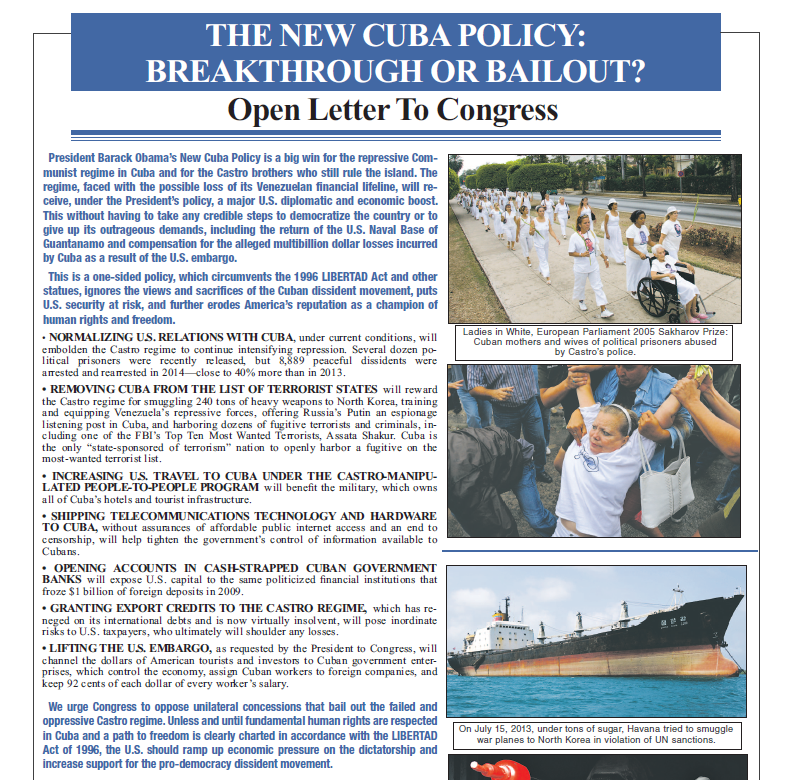 President Barack Obama’s New Cuba Policy is a big win for the repressive Communist regime in Cuba and for the Castro brothers who still rule the island. The regime, faced with the possible loss of its Venezuelan financial lifeline, will receive, under the President’s policy, a major U.S. diplomatic and economic boost.

This without having to take any credible steps to democratize the country or to give up its outrageous demands, including the return of the U.S. Naval Base of Guantanamo and compensation for the alleged multibillion dollar losses incurred by Cuba as a result of the U.S. embargo.

This is a one-sided policy, which circumvents the 1996 LIBERTAD Act and other statutes, ignores the views and sacrifices of the Cuban dissident movement, puts U.S. security at risk, and further erodes America’s reputation as a champion of human rights and freedom.

• NORMALIZING U.S. RELATIONS WITH CUBA, under current conditions, will embolden the Castro regime to continue intensifying repression. Several dozen political prisoners were recently released, but 8,889 peaceful dissidents were arrested and rearrested in 2014—close to 40% more than in 2013.
• REMOVING CUBA FROM THE LIST OF TERRORIST STATES will reward the Castro regime for smuggling 240 tons of heavy weapons to North Korea, training and equipping Venezuela’s repressive forces, offering Russia’s Putin an espionage listening post in Cuba, and harboring dozens of fugitive terrorists and criminals, including one of the FBI’s Top Ten Most Wanted Terrorists, Assata Shakur. Cuba is the only “state-sponsored of terrorism” nation to openly harbor a fugitive on the most-wanted terrorist list.
• INCREASING U.S. TRAVEL TO CUBA UNDER THE CASTRO-MANIPULATED PEOPLE-TO-PEOPLE PROGRAM will benefit the military, which owns all of Cuba’s hotels and tourist infrastructure.
• SHIPPING TELECOMMUNICATIONS TECHNOLOGY AND HARDWARE TO CUBA, without assurances of affordable public internet access and an end to censorship, will help tighten the government’s control of information available to Cubans.
• OPENING ACCOUNTS IN CASH-STRAPPED CUBAN GOVERNMENT BANKS will expose U.S. capital to the same politicized financial institutions that froze $1 billion of foreign deposits in 2009.
• GRANTING EXPORT CREDITS TO THE CASTRO REGIME, which has reneged on its international debts and is now virtually insolvent, will pose inordinate risks to U.S. taxpayers, who ultimately will shoulder any losses.
• LIFTING THE U.S. EMBARGO, as requested by the President to Congress, will channel the dollars of American tourists and investors to Cuban government enterprises, which control the economy, assign Cuban workers to foreign companies, and keep 92 cents of each dollar of every worker’s salary.

We urge Congress to oppose unilateral concessions that bail out the failed and oppressive Castro regime. Unless and until fundamental human rights are respected in Cuba and a path to freedom is clearly charted in accordance with the LIBERTAD Act of 1996, the U.S. should ramp up economic pressure on the dictatorship and increase support for the pro-democracy dissident movement.