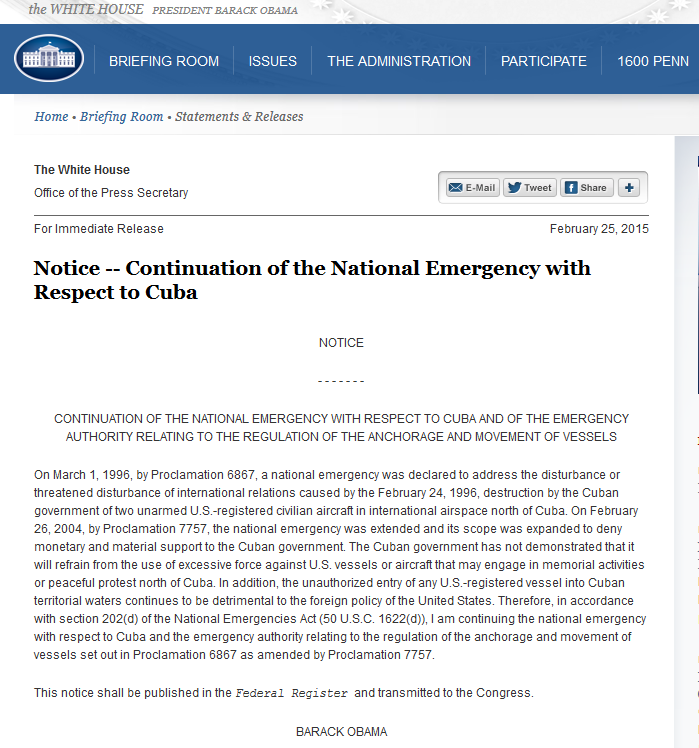 The Obama administration made two announcements on Cuba that are in dissonance with each other on the same day.

On February 25, a State Department official said that "[a] review ordered by Obama on whether to take Cuba off the blacklist was 'moving forward as quickly as we can ... but we don't think that should be linked to the restoration of diplomatic relations.'" It appears that the administration is moving as quickly possible to remove the Castro regime off the list of state sponsors of terrorism but the process does take time due to statutory requirements. This is part of its publicly stated aim of normalizing relations with the Castro regime. Voices, representing NGOs with the president's ear ridicule the Cuban dictatorship's presence on the list of terror sponsors.

Nevertheless on the same day The White House issued a notice titled "Continuation of the National Emergency with Respect to Cuba" which states:

On March 1, 1996, by Proclamation 6867, a national emergency was declared to address the disturbance or threatened disturbance of international relations caused by the February 24, 1996, destruction by the Cuban government of two unarmed U.S.-registered civilian aircraft in international airspace north of Cuba. On February 26, 2004, by Proclamation 7757, the national emergency was extended and its scope was expanded to deny monetary and material support to the Cuban government. The Cuban government has not demonstrated that it will refrain from the use of excessive force against U.S. vessels or aircraft that may engage in memorial activities or peaceful protest north of Cuba.

The Obama White House on February 25, 2015 is saying that it believes that the Castro regime is still willing to destroy unarmed, civilian aircraft or vessels in international airspace or waters north of Cuba if they "engage in memorial activities or peaceful protest." Let that sink in for a moment while at the same the State Department is defensively explaining why it can't go any faster in taking the Castro regime off the list of state sponsors of terrorism. Unfortunately this malady isn't only found in government as the following exchange over twitter with Tomas Bilbao of the Cuba Study Group on June 22, 2013 illustrates. Mr. Bilbao advocates taking Cuba off the list of state sponsors of terrorism. At the time I had made the counter argument which you can read here. 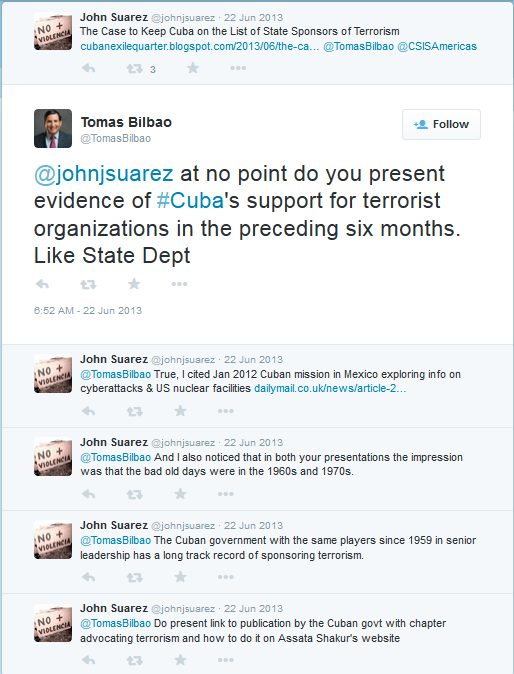 Less than a month after this exchange on July 16, 2013 the Castro regime was discovered smuggling a ship load of weapons hidden under bags of sugar that included MiG fighter jets, rockets, and ballistic missile technology to North Korea in violation of international sanctions.

The bottom line is that seeking to normalize relations with an abnormal regime is a recipe for failure not to mention cognitive dissonance. The Bush policy on North Korea being a recent and cautionary example.