"Killing of  Roa Kluiverth is not an isolated event, but is a consequence of the rise of repression in the country." - Provea, Venezuelan human rights organization over twitter on February 25th

More students protesting the Maduro regime in Venezuela continue to be shot in the head. On February 22, 2015 this blog posted five cases between February 17 and February 21 Sadly the body count continued its increase on Tuesday, February 24.

The Venezuelan human rights NGO, Provea reported on the latest youth to be shot in the head, 14 year old Kluiverth Roa and the circumstances surrounding his untimely death:


The latest is the killing of  of 14 year old high school student Kluiverth Roa, at the hands of a member of the Bolivarian National Police of  Táchira State identified as Javier Mora. This officer shot the teenager in the head, killing him on the afternoon of February 24th.

According to witnesses, Kluiverth Roa, a student in San Agustín Codazzi school in San Critóbal, had just gotten out of school and was in the Barrio Obrero sector of the city, three blocks from the Catholic University of Táchira (UCAT) where a student protest was taking place. Witnesses said the the teenager was surprised by a couple of functionaries riding on motorcycle and one of them shot the youth in the head.

Kluiverth Roa was buried on February 25th with his Scout troop serving as pallbearers. The respected human rights organization Provea warns that the "killing of  Roa Kluiverth is not an isolated event, but is a consequence of the rise of repression in the country." 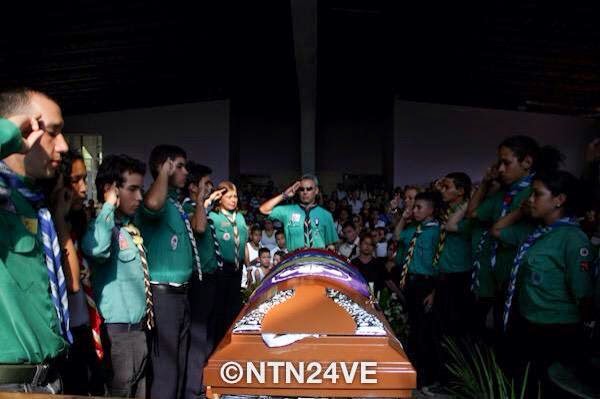