Memory is the treasury and guardian of all things. - Cicero 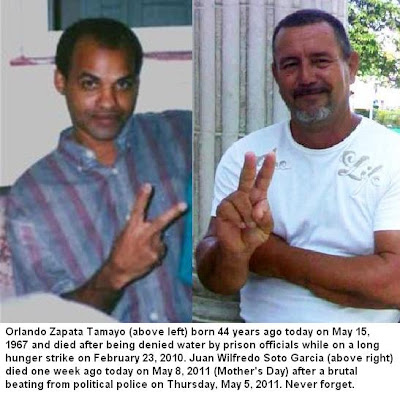 Today, May 15, 2011 marks a double anniversary: the birth of Orlando Zapata Tamayo, a Cuban human rights activist turned martyr, in Holguin, Cuba in 1967 and the one week anniversary of the extrajudicial death of Juan Wilfredo Soto Garcia on May 8, 2011 following a brutal beating three days earlier by political police of the dictatorship in Cuba. 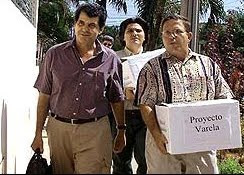 Five days earlier another important anniversary in the history of the democratic opposition was observed when on May 10, 2002 Oswaldo José Payá Sardiñas, Regis Iglesias Ramirez and Antonio Ramón Diaz Sánchez (from left to right in above picture) turned in 11,020 signatures on a petition demanding reforms that would see human rights respected in Cuba and fundamental freedoms restored known as the Varela Project to the Cuban regime. Both Regis Iglesias Ramirez, Antonio Ramón Diaz Sánchez and dozens of other activists involved in the Varela Project were imprisoned in the March 18, 2003 crackdown known as the Black Cuban Spring and spent seven long years in prison and now suffer exile in Spain. 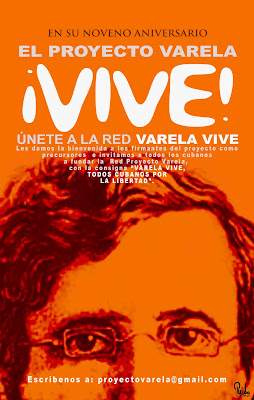 Reports indicate that in Santiago, Cuba dissidents seeking to honor and remember Orlando Zapata Tamayo were beaten in an act of repudiation while relatives had their home surrounded and were denied the right to visit their loved one's tomb. At the same time just one week ago on the same day that he died Juan Wilfredo Soto Garcia was buried. At this funeral a Cuban pastor spoke about the life of the Cuban activist and the circumstances surrounding his death.

Totalitarians may terrorize and murder but those who live on have an obligation to remember and rescue both the facts and the truth. Please assist in this effort by spreading the word. Both Orlando Zapata Tamayo and Juan Wilfredo Soto Garcia were killed for exercising their fundamental rights as human rights defenders in Cuba. At the same time remember that the Varela Project shook the foundations of the Castro regime and continues to live on today.

It is also important to remember with gratitude the solidarity of countries such as the Czech Republic, Germany, and Poland who have expressed their concerns surrounding the death of Juan Wilfredo Soto Garcia along with their calls for an investigation.
Posted by John Suarez at 9:10 PM