If liberty means anything at all, it means the right to tell people what they do not want to hear. - George Orwell 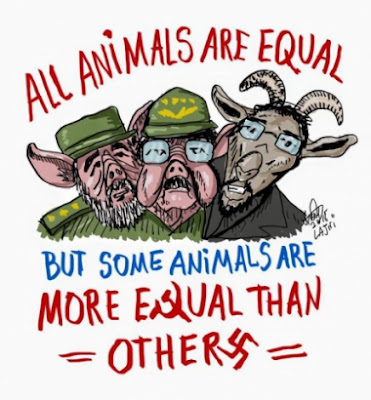 Amazing scene today at the King Mango Strut Parade in Coconut Grove where activists associated with the #TodosMarchamos (#WeAllMarch) campaign participated in this historic festival dedicated to satire and fun in Coconut Grove, Florida in its 34th edition.

The Cuban group joined the parade starting at 2pm making a satire of George Orwell's Animal Farm wearing masks,  carrying posters and dancing a conga with a live band.

The organizers of the event said that there objective was to "recontextualize George Orwell's fable within the present situation in Cuba, the re-establishment of relations with Washington DC, the increase in repression and the campaign #Todos Marchamos (We All March).

The activity was carried out by the organizing committee of #Todos Marchamos (We All March) in Miami and in the action the following artists and activists from the island took part: Danilo Maldonado, El Sexto, Lía Villares, Gorki Águila and Ailer González Mena.

At the front of the Conga was Fidel Castro driving a truck and leading the march followed by President Obama trying to keep up on foot behind him saying "leading from behind."

The protest was a party and in a free society the participants did not have to fear being the objects of an act of repudiation or government orchestrated assault. Unfortunately in Cuba today that is not the case.

We must remain vigilant for these activists when they return home to Cuba.