Human rights day at MDC, Eve Ensler's monologue, and the crackdown in Cuba

"If you are neutral in situations of injustice, you have chosen the side of the oppressor. If an elephant has its foot on the tail of a mouse and you say that you are neutral, the mouse will not appreciate your neutrality." -  Archbishop Desmond Tutu


In Cuba shouting "freedom" and "long live human rights" can get you arrested. On International Human Rights Day 2015 in Cuba the democratic opposition and independent civil society peacefully gathered to celebrate. Meanwhile the Castro regime began on December 9th to detain activists and lay siege to their homes in what can only be described as a crackdown. Preliminary estimates placed the number of detained activists today at 100 but despite this Cuban human rights defenders across the island carried out their activities. Reuters reported that at least six protesters were detained for shouting "Freedom!" and "Long live human rights!" in Havana. Amnesty International placed events into context on December 10, 2015:


Cuban human rights activists are at increased risk of detention or harassment from the authorities amid demonstrations on International Human Rights Day, 10 December, said Amnesty International following a wave of almost 1,500 arbitrary arrests in just over a month. Yesterday, police in the capital Havana arbitrarily restricted the movement of members of the prominent Ladies in White (Damas de Blanco) group of activists as they prepared for today’s demonstrations. This came after at least 1,477 politically motivated detentions in November 2015, the highest monthly total in many years, according to the Cuban Commission for Human Rights and National Reconciliation (CCDHRN). [...] For years, harassment on Human Rights Day has been the rule rather than the exception, and is absolutely unacceptable,” said Erika Guevara-Rosas, Americas Director at Amnesty International.

Unfortunately 2015 has been a terrible year for human rights in Cuba not only because of the huge number of arbitrary detentions but also the escalating violence against activists and the silence by visiting American human rights defenders who met with representatives of the dictatorship without addressing the violence the system commits against its own people. This has and will continue to have profoundly negative consequences for the marginalized and dispossessed.
An emblematic example of this is the plight of Cuban human rights defender, Sirley Ávila León, age 56, who was gravely wounded in a machete attack in Cuba on May 24, 2015 by Osmany Carrión who had been sent by state security agents. She lost her left hand while raising it to block a machete blow to the head. She suffered deep cuts to her neck and knees, lost her left hand and the machete cut through the bone of her right humerus leaving her arm dangling. Sirley, a one time delegate of the People’s Assembly of Majibacoa worked through official channels to represent her community but when they ignored her requests to keep a school open she went to the international media and was later removed from office. She joined the democratic opposition and this led to escalating acts of repression by state security against the 56-year-old mother of two culminating in this attack. Sirley is still in danger and her assailant is free to walk the streets of Cuba. Her case has been documented in a precautionary measure by the Inter-American Commission on Human Rights on September 2, 2015.

Surprisingly, on October 30, 2015 when Eve Ensler a dramatist and American feminist, known for her work the Vagina Monologues, was visiting Cuba she didn't meet with the women who are regularly beaten up by agents of the Castro regime for exercising their human rights to peaceful assembly and expression but with Mariela Castro. Mariela Castro is the privileged daughter of the Cuban dictator Raul Castro and a fierce advocate of the 56-year-old communist dictatorship.  Ms Castro is known to use the same dangerous and dehumanizing rhetoric against dissenters as her dad, Raul Castro, and uncle, Fidel Castro do. An example of this is the highly reported incident over twitter with Yoani Sánchez in 2011 when the dictator's daughter denounced tolerance and called critics "parasites."  Eve Ensler has a campaign called One Billion Rising that purports "to amplify the voice of marginalized women." Furthermore the name of the campaign revolves around the idea that one billion women in the world are the victims of some form of violence. This raised a number of questions in the incongruity between her stated aims in the One Billion Rising campaign and her actions and statements when visiting Cuba. 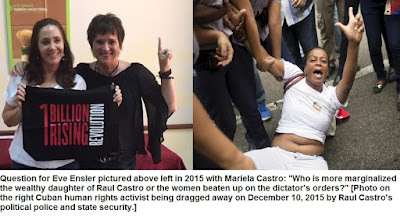 Miami Dade College had invited Eve Ensler to speak on International Human Rights Day and that seemed a prime opportunity to raise awareness for marginalized Cuban women who have and continue to be victims of the Castro dictatorship's violence. This was also a good moment to ask the American feminist one question: "Who is more marginalized the wealthy daughter of Raul Castro or the women beaten up on the dictator's orders?" However, she was not physically present and spoke over Skype for around 40 minutes and then did not take any questions. Ensler's critique of U.S. foreign policy, during her monologue, as imperialist and advocacy for "revolution" may explain her moral blindness with the Castro dictatorship but does not excuse it and raises questions such as the one posited above.


Nevertheless the organizers of the event had a more interactive approach that allowed Cuban activists to raise the plight of Cuban women with several posters and two activists were able to speak out. One of them, Ana Olema, was able to reach the microphone and speak out on behalf of Cuban women. Meanwhile in Cuba the international media captured images of Cuban women being rounded up and roughed up for wanting to peacefully march and express their dissent. It was an honor to roughly translate her impassioned words to English and only hope that in the stress of the moment that it was understood. Let me close by echoing the words that got activists arrested in Cuba earlier today: "For freedom" and "long live human rights" for men and women!