81 days later and the United States government has appealed to the Cuban government to release Cuban political prisoner Vladimir Morera Bacallao. However now is not the time to stop the effort to raise awareness on the plight of the labor activist and human rights defender. Citizen activists of goodwill around the world need to intensify our efforts to obtain his release and save his life by doing three things. First, please reach out to your elected representatives and ask them to speak out on Vladimir Bacallao's behalf. Second, call the hospital he is currently at inquiring about his health and if the Cuban government will free him. Third, use the hashtag #SaveBacallao and let others know about his plight.

Work to save his life now so that if you fail and the question is asked: Where were you the day Vladimir Morera Bacallao died then at least you can say: "Trying to save his life." Canadian punk rock band I.H.A.D. put that question to music in September of 2010, just seven months after Orlando Zapata Tamayo died asking Canadian tourists: "Where were you the day Orlando Zapata Tamayo died?" Below is a video of the song from 2012.

On December 27, 2015 independent journalist Reinaldo Escobar of the publication 14yMedio published an excellent article on Vladimir Bacallao that was translated to English and is reproduced below that gives an overview of his case:


Cuban Activist On The Brink Of Death After A Prolonged Hunger Strike / 14ymedio, Reinaldo Escobar

A blacksmith by profession, he never imagined that after so many years of fabricating bars for his neighbors’ homes, he would end up locked behind prison bars. The activist Vladimir Morera Bacallao will mark 80 days on a hunger strike this Monday, 28 December, the Day of the Holy Innocents. That is, if the authorities don’t release him or he doesn’t starve to death first.

Right now, Morera Bacallao languishes in intermediate care at the Arnaldo Milian provincial hospital in the city of Santa Clara. He was taken there less than a week ago, after his family and colleagues in the Cuban Reflection Movement (MCR) carried out a campaign demanding that the prison authorities pay attention to his case.


MCR leader Librado Linares told 14ymedio that morera Bacallao now weighs less than 95 pounds, and within the next few hours his health could deteriorate “to the point of no return.” Saturday afternoon, Linares, a former prisoner of the 2003 Black Spring, said “he is so weak now that he doesn’t recognize anyone.”

Linares says that he is “knocking on the doors of the Bishop [of Santa Clara] and some of the province’s fraternal organizations,” to prevent the hunger striker’s death and to achieve his immediate release. The dissident is calling on the national and international community to do everything possible, “to not let him die.”

Morera Bacallo, was sentenced to four years in prison in case 404 of 2015, accused of the crime of “injuries.” The basis of this accusation, according to his family members who attended the trial, was a blow to the head received by Ivis Herrera, second secretary of the Communist Party in the municipality of Manicaragua, in the province of Villa Clara.

Several witnesses confirmed that the injury occurred when the official fell to the ground while sliding on melted asphalt that had been thrown down in front of and around Morera Bacallao’s house. The dumping of the material was part of the aggressions of the area’s “rapid response brigades” against the dissident, instigated by Ivis Herrera himself.
The events, classified as “public disorder,” happened on 19 April of this year, on the eve of the elections for the People’s Power. The opponent decided to put a sign on the door of his house where he proclaimed, “I vote for my freedom and not in some elections where I cannot elect my president.” The text unleashed the fury of the town’s government rulers.

Most of the working-age people in Manicaragua work in military factories or are active members of the armed forces. Thus, the residents of the area respond with a special intolerance and violence against any public display of differences with the government.
Rapid response brigades assaulted Morera Bacallao’s house in April, breaking windows, beating the inhabitants without distinction to sex or age, and throwing bricks. The operation included the spreading of melted asphalt, along with insults and abuse. In the early morning hours, when it seemed that everything was over, the uniformed Special Brigade of the Ministry of the Interior arrived and arrested the activist.

From the moment he fell into prison, the dissident declared himself on a hunger strike and only abandoned it in June, 40 days later, when he was hospitalized and they promised they would review his case. As the authorities did not fulfill their promise, on 9 October he resumed his hunger strike in the Guamajal prison hospital on the outskirts of Santa Clara. There he lost more than 88 pounds, according to Arsenio Lopez Roa, an inmate who provided the information.

Last Monday, the medical team informed the family that the striker had “vomited blood at least eight times, during the transfer from prison to the hospital.” The same source predicted that “at any moment he could experience digestive bleeding.”

In November 2013, Morera Bacallao was sentenced to eight years in prison for reasons very similar to today’s, after suffering an act of repudiation. He was released after one year, on 14 December 2014, after consecutive hunger strikes. Two months later, his name appeared on the list of the 53 prisoners released after talks between Barack Obama and Raul Castro; a list that was not initially made public at the time of their release.

Castro regime trolls over social media continue to slander the hunger striking former independent labor activist and current member of the Cuban Reflection Movement.  This type of libel was also used in campaigns against two Cuban prisoners of conscience: Orlando Zapata Tamayo who died on hunger strike on February 23, 2010 and Wilman Villar Mendoza who died on hunger strike on January 19, 2012. Following their deaths the campaigns slandering and libeling their name posthumously intensified as did the harassment and intimidation against their family members. People of goodwill need to remain vigilant. 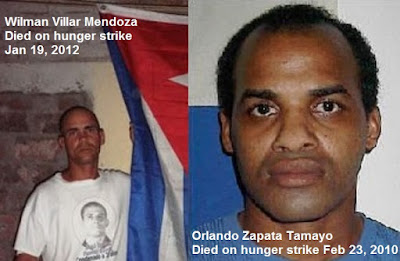