Remembering on Christmas Eve those in prison for acts of conscience: A Call to Action

"Continue to remember those in prison as if you were together with them in prison, and those who are mistreated as if you yourselves were suffering."- Hebrews 13:3 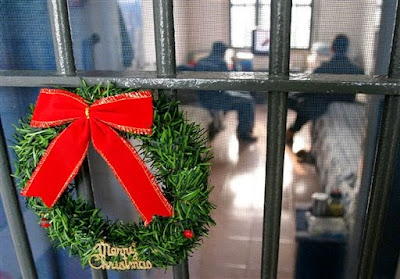 Prisoners of conscience are observing Christmas Eve in terrible conditions in China, Cuba, Venezuela, Vietnam, and many other places around the world. It is impossible to list them all here but it is important to remember them. Here are a few that represent the many who remain unnamed.


Nobel Peace Prize laureate Liu Xiaobo on Christmas day in Communist China six years ago today was being condemned in a show trial to eleven years prison. Two days prior he was able to make a final statement in which the nonviolent character of his struggle was made evident:


“I have no enemies and no hatred. None of the police who monitored, arrested, and interrogated me, none of the prosecutors who indicted me, and none of the judges who judged me are my enemies.”

He is still jailed today and has been detained for seven years. He is being punished for co-authoring Charter 08, a proposal for political and legal reform in China. Campaigns are underway around the world raising attention on his plight and calling for his freedom. His family has been blocked from visiting him.


Despite the hype around U.S. - Cuba relations the human rights situation under the communist dictatorship of the Castro family remains bleak.  This Christmas finds several Cuban human rights defenders on hunger strike protesting their unjust incarceration and at least one who may not see the New Year. On December 17, 2015 the Cuban Democratic Directorate and the Assembly of the Cuban Resistance released an open letter to President Obama highlighting their concerns for the following imprisoned activists:


This December 10, 2015 – International Human Rights Day – more than 300 activists were arrested in Cuba. This continues a pattern of over 8,000 politically-motivated arbitrary detentions this year. Political prisoners continue to be unjustly jailed in Cuba. Some have responded to this injustice by declaring themselves on hunger strike leading to additional punishments by prison officials. Among these political prisoners, we are deeply concerned by the current plight of seven: Geovanys Izaguirre Hernandez and Laudelino Mendoza who have been imprisoned since November 6, 2015 for writing a sign that read, “We want change, and no more hunger;” Hugo Damian Prieto Blanco, who was detained on October 25, 2015 accused of charges of public disorder; Vladimir Morera Bacallao arrested and sentenced to four years in prison for writing on the wall of his home, “I vote for my freedom and not in elections where I cannot elect my president,” he has been on hunger strike since October 9th demanding his freedom; also, on hunger strikes since December 1, 2015, Felipe Martínez Companioni and Alexander Palacios Reyes, jailed for handing out human rights fliers; and Javier Jouz Varona since December 14, 2015 when he was imprisoned for carrying out opposition activities in the streets.

On December 22, 2015 Radio República reported that Cuban political prisoner Vladimir Morera Bacallao had been "urgently" transferred from Guamajal prison to "Arnaldo Milian" provincial hospital in the city of Santa Clara in serious condition and he was placed in intensive care.
Vladimir's wife, Maribel Herrera reported to Diario de Cuba that "He is very weak and delicate, weighing 45 kilos, and is still on hunger strike, not eating anything, drinks little water and won't allow them to feed him intravenously.

Human rights activist Angel Moya reported over social media that 40 activists, members of the Ladies in White, were arrested on December 22, 2015 by the political police and state security agents to prevent them holding a Christmas party and handing out toys to needy children.

Despite the popular rejection of the Maduro regime on December 6, 2015 in Venezuela's elections to the National Assembly the plight of prisoners of conscience in that troubled South American country remains worrisome with reports that there are currently 75 behind bars. The democratic opposition has had a message of reconciliation and a call for an amnesty for political prisoners following their December 6, 2015 victory.  Meanwhile Nicolas Maduro has rejected the call and is trying to carry out a Christmas Coup against the newly elected National Assembly that has the support of a vast majority of Venezuelans.

Leopoldo Lopez, the emblematic national figure who surrendered to the Maduro regime before a gathering of tens of thousands of his supporters on February 18, 2014 to a process that has been neither transparent or fair demonstrates with his continued imprisonment the dictatorial nature of the current regime. Erika Guevara-Rosas, Americas Director at Amnesty International on the politicized verdict in the show trial on September 10, 2015 said:

“The charges against Leopoldo López were never adequately substantiated and the prison sentence against him is clearly politically motivated. His only ‘crime’ was being leader of an opposition party in Venezuela.”


In Vietnam there are approximately a 135 political prisoners according to a July 2015 report by Human Rights Watch.  Amnesty International has an urgent action underway for Tran Thi Thuy and has recognized her as a prisoner of conscience providing her background and the circumstances surrounding the 2010 arrest:


Tran Thi Thuy is a trader, Hoa Hao Buddhist and land rights activist. She was arrested in August 2010 and tried with six other land rights activists by BếnTre Provincial People’s Court on 30 May 2011. She was sentenced to eight years’ imprisonment under Article 79 of the Penal Code for “activities aimed at overthrowing” the state, and five years’ house arrest on release. According to the indictment, all the activists accused of having joined or been associated with Viet Tan, an overseas-based group peacefully campaigning for democracy in Viet Nam. The UN Working Group on Arbitrary Detention has stated that the detention of the seven activists including Tran Thi Thuy is arbitrary and should be remedied by their release and compensation. Tran Thi Thuy is currently detained in An Phước Detention Centre, Bình Dương province, which is approximately 900 km from where her family lives; it takes them three days to get there.

Unfortunately, Vietnamese prison officials are using the denial of medical care as a weapon to coerce a confession from the land rights activist:


Tran Thi Thuy first became ill around April 2015 while detained in a facility at Long Khánh town in Ðồng Nai Province. A prison doctor diagnosed a tumour on her uterus, but she was not provided with treatment. A prison officer told her to admit her crimes or “die in prison”. She has difficulty walking, needing a crutch or help. Her family have provided her with traditional medicine. She also has high blood pressure for which she takes medication. Tran Thi Thuy is in severe physical pain and has told her family that she has felt on the verge of death at several points in recent months. The denial of medical treatment in these circumstances could amount to torture and therefore a violation of the Convention against Torture, which came into force in Viet Nam in February after ratification last year.

Reverend Martin Luther King Jr. observed in his April 1963 "Letter from a Birmingham Jail" addressed to fellow clergy counseling patience and tolerance with existing racial injustices in the United States that "Injustice anywhere is a threat to justice everywhere." This is the bumper sticker quote most are familiar with, but Reverend King continued in the letter explaining, "We are caught in an inescapable network of mutuality, tied in a single garment of destiny."

A half century later and the wisdom of his words are becoming manifest in a world where compromises made with totalitarian regimes, such as China, for the sake of the financial gain of a few have resulted in a planet that is more polluted and where human rights and freedom have been in decline for nearly twenty years.

People of good will have a responsibility to do what they can. Oswaldo Payá Sardiñas in an address to the European Parliament on December 17, 2002 explained that "[t]he cause of human rights is a single cause, just as the people of the world are a single people. The talk today is of globalization, but we must state that unless there is global solidarity, not only human rights but also the right to remain human will be jeopardized." Please join me in speaking up for these and other political prisoners and remember, that although helping them in a utilitarian sense we also help ourselves, that more importantly we must do this because it is the right thing to do. The great Czech dissident Václav Havel explained back in 1990 that "[t]he salvation of this human world lies nowhere else than in the human heart, in the human power to reflect, in human meekness and human responsibility." It begins with you. Will you do your part?