Venezuela stopped being a democracy a while ago. What you have now is a dictatorship that long ago undermined the rule of law, imprisons popular opposition leaders, murders student activists, hides billions in foreign Swiss bank accounts and rigs contested elections to give the appearance of a democracy. Maduro and his regime are threatening voters and may not recognize a loss at the polls. This is why the international community has taken such an interest in today's election to the National Assembly.

The President of the Christian Democratic Organization of America (ODCA), Jorge Ocejo led a delegation of fifty parliamentarians to attend the transcendental legislative elections in Venezuela this Sunday.  The Mexican political leader, Jorge Ocejo, confirmed that a large delegation of International Christian Democrats arrived on Friday to Caracas to integrate an election observation mission for the parliamentary elections scheduled for today, Sunday, December 6th.  Ocejo said the ODCA delegation is composed of more than 50 parliamentarians and political leaders from 16 countries in Latin America, who were invited by the Campaign Command of "United Venezuela"  of the Table of Democratic Unity (MUD). In Sunday's election more than 19 million Venezuelans are eligible to vote and elect 167 deputies to the National Assembly to hold office for a period of 5 years, from 2016 to 2021. According to most polls, the democratic opposition  for the first time in 17 years will defeat the ruling party for the first time since the electoral triumph of Hugo Chavez in the election of December 6, 1998.  Presentación de la Misión Electoral en Venezuela 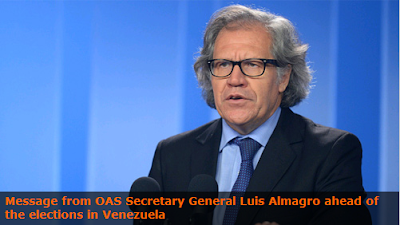 OAS Secretary General Luis Almagro: "24 hours before the legislative elections in the Bolivarian Republic of Venezuela, we call on all Venezuelans to ensure that Sunday is a civic celebration and that the sovereign - the people - can exercise their right to vote in peace. We also hope that December 7 is a day of unity, peace, and calm following the electoral results. All the peoples of our Americas and the world are watching attentively what happens in Venezuela. In this context, we respectfully ask all sectors of Venezuelan society, following the electoral result, to find mechanisms to begin a dialogue and a great national reconciliation." Reference: E-349/15 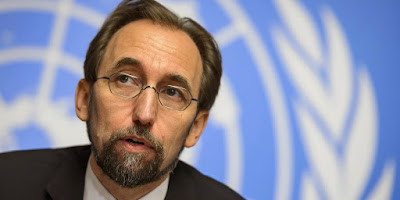 Zeid Ra’ad Al Hussein, UN High Commissioner for Human Rights: "I remain very concerned at the deteriorating human rights situation in Venezuela, particularly the government’s harsh responses to criticism and to peaceful expressions of dissent. The use of lethal force against demonstrators is deeply disturbing. We have also received repeated reports of intimidation and public smear campaigns, including by high-ranking government officials, of human rights defenders. I am particularly concerned at the continued detention of opposition leaders and demonstrators, often for prolonged periods."  Opening Statement, Item 2, High Commissioner's Annual Report

The International Young Democrat Union declared: Constant violations to human rights and individual freedoms in Venezuela and Ecuador must end – immediately; Support for political leaders who resist human rights violations, fight against the abridgment of individual freedoms, and defend freedom of peaceful assembly and protest of those in opposition to an oppressive regime; International organizations be cognizant of the plight of those oppressed, create missions to stop human rights violators. The IYDU demands with specificity: Freedom for all political prisoners in Venezuela and Cuba; International groups send observers to Venezuela leading up to the December 2015 parliamentary elections to ensure the democratic process is upheld so that free and fair elections exists; Member parties act to the best of their abilities to influence the governments of their respective countries to protest the violations against freedom of expression in Latin America and the Caribbean. In conclusion, the IYDU remains steadfastly committed to free people, the rule of law, liberal democracy, and the right of self determination believing that without freedom of speech or freedom of assembly none of those pillars of democracy can flourish. IYDU Demands an End to Human Rights Violations in South America

Venezuelan democrats are not alone and are being accompanied by international democratic movements on the ground as observers in Venezuela and via social media across the internet. Whatever happens today will be documented and reported far and wide.
Posted by John Suarez at 2:30 AM