Today 1 in 5 live under a communist regime. 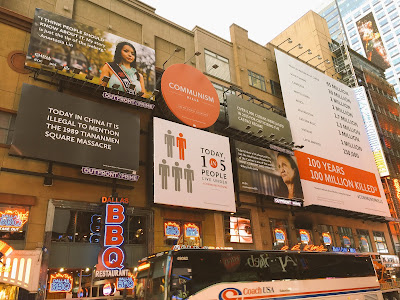 On October 13, 2016 the Victims of Communism Memorial Foundation placed a series of advertisements in Times Square in New York City highlighting the crimes of communism including the killing of 100 million human beings in less than a century. The day before the organization posted a video that in the space of a minute exposes the malevolent nature of this ideology that in practice is a system of repression.


Among the victims highlighted is Sirley Ávila León, a local elected official who tried to keep a school in open in Cuba, was purged from her position, and once she became a dissident Sirley was subjected to a machete attack engineered by Castro's intelligence service in May of 2015.

She went back to Cuba last month, found her home occupied by strangers placed their by the Cuban government, and her attacker out on the street threatening to finish the job he started.

This is Cuba in 2016. It remains a brutal communist dictatorship. Thank you to the Victims of Communism Memorial Foundation for reminding the world of this at a time of great moral confusion.