"The truth will make them stand in solidarity with our freedom." MCL Declaration on email of John Podesta, campaign manager for Hillary Clinton. 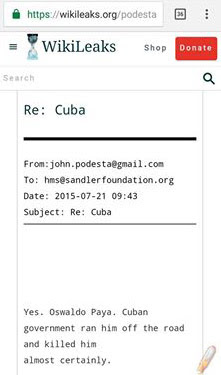 By the Christian Liberation Movement

"The truth will set them in solidarity with our freedom."

In a July 2015 email disseminated by wikileaks, John Podesta, campaign manager for Hillary Clinton says the phrase "Yes. Oswaldo Payá. Cuban government ran him off the road and killed him almost certainly."

That a very important person, also linked to the administration of President Obama and now the Democratic candidate, to make such a statement indicates that in the upper echelons of power in the United States they have evidence or details that allow them to make that statement.

The Christian Liberation Movement from the outset spread this message "Angel says that a vehicle forced us off the road" sent by Aron Modig, who traveled with Angel Carromero as a passenger in the vehicle that suffered the attack.

Since then we have been divulging all the details that we have known about this tragedy and called for an independent investigation to clarify what happened. Not only the United States, governments such as the Spanish, the Swedish and many foreign ministries have information about what occurred on July 22, 2012 on the road from Bayamo.

We hope that whoever wins the election demand and directly support this independent investigation into the death of Oswaldo Payá and Harold Cepero and to support our demand, "One Cuban, one vote" for the freedom that Oswaldo and Harold Cuba lived and died for reach the hand of the sovereign decision of the people. This is the way for the democracies to have a relationship of total solidarity with Cuba that is also all of us Cubans who do not have rights.