Why Cuba should not be on the UN Human Rights Council

What the regime claims and some of the facts in evidence not mentioned
The totalitarian dictatorship in Cuba is undertaking to return to the United Nations Human Rights Council with a campaign pledge completely at odds with the regime's human rights record. The vote will be taking place later today at the United Nations.

In light of all the falsehoods and omissions a few facts placed in historical context are needed for the sake of the historical record.

First it is important to mention that during Cuba's democratic spring that lasted from the free elections of 1940 until a 1952 coup the island nation played a historic role in advancing regional and international human rights first at the Organization of American States and later at the United Nations with the drafting of the Universal Declaration of Human Rights.

Tragically, the revolutionary communist regime of the Castro brothers over the past 57 years has done everything possible to undermine and destroy this legacy. Below is a partial accounting of the "great importance" the Castro dictatorship has attached to human rights:

The Castro regime had been one of the few voices applauding the 1989 Tiananmen Square Massacre in China congratulating them for "defeating the counterrevolutionary acts."

On March 28, 2008 the Castro regime’s delegation together with the Organization of Islamic Congress (OIC) successfully passed resolutions undermining international freedom of expression standards at the United Nations Human Rights Council.

On February 2, 2009 during the Universal Periodic Review of China the Cuban Ambassador, Juan Antonio Fernandez Palacios encouraged the Chinese regime to repress human rights defenders in China with more firmness.

On May 28, 2009 amidst a human rights crisis in Sri Lanka the Cuban government's diplomats took the lead and successfully blocked efforts to address the wholesale slaughter there.

On August 23, 2011 the Cuban government along with China, Russia and Ecuador voted against investigating gross and systematic human rights violations in Syria.

On March 17, 2014 the UN Human Rights Council “was divided” in its discussion of the atrocities in North Korea between those who want the case to be elevated to the International Criminal Court and those who reject outright the existence of a commission of inquiry and conclusions. The Castro regime vigorously defended the North Korean regime and denounced the inquiry.

On March 21, 2014 at the United Nations Human Rights Council, the Castro dictatorship again applauded the human rights record of the People's Republic of China, and voted to block the effort of human rights defenders to hold a moment of silence for Cao Shunli. She was an activist who had tried to participate in China’s Universal Periodic Review, but was detained at the airport trying to get on a flight to attend the current session  and accused of "picking quarrels and provoking troubles." Within three months in detention and being denied medical care Cao Shunli died on March 14, 2014.

The Castro regime has worked tirelessly to undermine human rights standards worldwide and collaborated with some of the worse regimes in the world with such effectiveness that the end result has been human rights in decline for over a decade world wide.

UN Watch, a watchdog group based in Geneva Switzerland, has called attention to some of the more absurd claims made by the Castro regime to get back on the Human Rights Council such as:


The campaign pledge also includes this line:
This was a sham visit by UNHRC official Jean Ziegler, founder of the “Mummar Qaddafi Human Rights Prize,” and a notorious apologist for the Castro regime.

The Castro regime omits any mention of the invitation it extended on January 28, 2009 to the United Nations Special Rapporteur on Torture, Manfred Nowak, an individual who had been extremely critical of the United States highlighting abuses in Guantanamo, Iraq and Afghanistan. This invitation was reaffirmed publicly at the UN Human Rights Council in February of 2009 by Cuba's so-called "Minister of Justice." The international press ate it up. I was there and saw the propaganda circus in full swing.

However seven years later with Mr. Nowak long gone and his successor Juan Mendez there since 2010 has not been able to visit the island. Worse yet back in 2009 because of the non-invitation invitation an opportunity was lost visit another country to examine torture claims.

In his final year as Special Rapporteur on Torture, Manfred Nowak addressed the failure of the Cuban government to permit his visit to the island in 2010:


“I regret that in spite of its clear invitation, the Government of Cuba has not allowed me to objectively assess the situation of torture and ill-treatment in the country by collecting first-hand evidence from all available sources.”

Not only did the Castro regime deny an examination of the situation of torture in Cuba, but in occupying the rapporteur in this game another country was potentially denied a visit that would have also helped other peoples.

Even on social and economic rights the Castro regime is a mess, but thanks to an efficient propaganda apparatus and manufactured statistics it has managed to sell the lie that it is some sort of medical and educational super power to the point that the President of the United States has repeated the false narrative. The facts on the ground say otherwise.

Education in Cuba lacks resources and instructors but even in the past when massive subsidies made it more workable it was aimed more at indoctrination and purging those students who were not ideologically pure.

The same holds true with healthcare in Cuba. Medical neglect led to scores of psychiatric patients dying of exposure and hypothermia in 2010. Arresting medical doctors and independent journalists to cover up epidemics should concern not only tourists but also their respective countries. Furthermore the case of Cuban dissident Sirley Avila Leon in 2015 who was not only denied adequate medical care but was prescribed treatment worsening her condition following a machete attack ordered by state security.  This practice goes back decades and has cost the life of more than one human rights defender.

The Castro regime claims in its campaign pledge that Cubans are “masters of their political fate” and “participate actively” in an “effective system of democracy” that they designed and approved in a universal plebiscite. This ignores what Fidel Castro told Barbara Walters in 2002: "Yes they [Cubans] have the right to petition, but not to change the Constitution."Brave Cubans who pursued the objective of a plebiscite through legal channels in what is known as Project Varela ended up being subjected to Stalinist show trials in the Spring of 2003 and many years in prison. The man who led the effort Oswaldo Payá Sardiñas, died together with Harold Cepero Escalante under suspicious circumstances in what appears to have been an extrajudicial killing carried out by Castro's secret police on July 22, 2012 who forced them off the road. 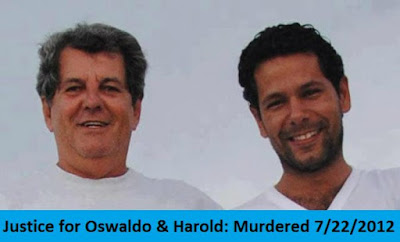 Despite the claims of the Castro dictatorship the reality is that Cubans who want to be "masters of their political fate" in Cuba are risking harassment, beatings, imprisonment, torture and being murdered by the state if they persist and are effective in their activism as Oswaldo Payá, Laura Pollán, and many others have discovered over the decades.

These are some of the facts that need to be placed in evidence for a serious discussion of whether Cuba should or should not be a member of the United Nations Human Rights Council. Sadly what will take place tomorrow is a sham.