On the eve of the debate between Hillary Clinton and Donald Trump, “The Rebel Yell”, the University of Nevada, Las Vegas student newspaper published a full page ad urging them to “prod the Obama Administration to condition any future negotiations and affirmative responses to General Raul Castro’s requests to … the immediate end to beatings and abuses of peaceful dissidents by the regime’s police.”

The ad “calls on all Americans to petition General Raul Castro to stop beating and abusing these women.”

The petition, issued by the Center for a Free Cuba, an independent, nonpartisan organization dedicated to the promotion of human rights in Cuba, says that “despite President Obama’s hopes since December 17, 2014 when he announced [his Cuba outreach], political repression including the beatings resulting in bone fractures and the dragging of the Ladies in White, mothers, wives, sisters, and daughters of political prisoners have increased.”

The ad includes five photographs of Cuban police assaulting the women, including two photographs showing them with broken arms. Among them in the photos is Laura  Pollán, the founder of the “Ladies in White” with a broken arm and her hand showing the “L” sign for liberty. Ms. Pollán died under suspicious circumstances at a Cuban hospital. The autopsy report has yet to be released.

The petition asks Mrs. Clinton and Mr. Trump to urge General “Raul Castro [to permit] the International Committee of the Red Cross and Amnesty International to visit Cuba’s political prisoners.”

Further negotiations with Havana should be incumbent “on the return by General Castro of American terrorists, killers of U.S. police officers to face American justice. They are wanted by the FBI and President Obama withdrew Cuba from the State Department list of state sponsors of terrorism. Now out of the list Cuba should act accordingly,” the Center for a Free Cuba says.

“We call on Hillary Clinton and Donald Trump to pledge to base U.S. policy toward Cuba on an immediate cessation of these outrages,” Ambassador James Cason, president of the Center for a Free Cuba said. Ambassador Cason a career diplomat served as Ambassador to Paraguay and Chief of Mission in Havana for three years. [Ad follows]


The Center for a Free Cuba based in Washington DC is an independent, nonpartisan organization dedicated to the promotion of human rights in Cuba. 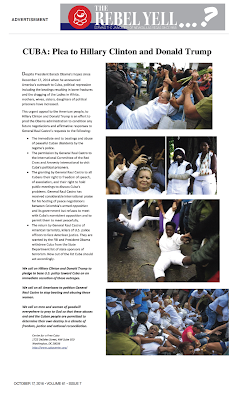