12 Ladies in White beaten and detained on Sunday in Cuba

"I have bruises all over my body." - Aimee Garces, one of the Ladies in White subjected to the attack this past Sunday. 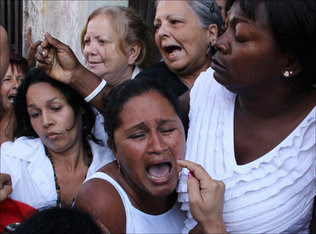 Photo of Ladies in White beaten up back in 2010


Update: On August 22, 2011 Amnesty International called for an end to the intimidation of the Ladies in White in Cuba.

For the fifth Sunday in a row the regime in Cuba has unleashed its state security agents on the Ladies in White, a group of nonviolent women seeking the freedom of political prisoners, beating them up and detaining them from attending Mass at the Cathedral in Santiago and marching silently afterwards.

Ironically on the same day that this was happening I was marching with friends On Miami Beach at Lincoln Road Mall to protest the mistreatment of silent protesters in Belarus harassed and detained by security forces their for silently dissenting the dictator in power: Alexander Grigoryevich Lukashenko who has been in power there since 1994.

Cuban activists on twitter in the island reported on events there that were later reported in wire services in Europa Press. 12 members of the Ladies in White were detained on Sunday, August 21, 2011 as they attempted to attend mass in the cathedral of the city and pray for the freedom of political prisoners, reported opposition activist and former prisoner of conscience José Daniel Ferrer.

The home of Aimeé Garcés Leiva, in Palma Soriano, was surrounded by agents of the political police and nearly a hundred agents of the Ministry of the Interior at 7:00am. They had arrived in two buses filled with dozens of police agents ready to repress. (Eleven Ladies in White were already inside the home waiting to attend mass together). Another two homes were also targeted. According to tweets sent out by José Daniel Ferrer who followed events closely.

Prior to appearing on the porch of the home at 8:30 a.m. while still inside they prayed an "Our Father" and a "Hail Mary," said Caridad Caballero. "Belkis Cantillo, Aimeé Garcés Leiva, Yureni González, Oria Casanova, Caridad Caballero, Isabel Peña, Mildred Sánchez, Maritza Cardosa Romero, Milagros Leiva Ramírez, Karina Quintana, Mildrey Noemí Sánchez y Julia Cairo Jalil, exited (the home) singing the national anthem," explained José Daniel . Caridad Caballero described what took place. She explained how following the anthem they explained that they were nonviolent and what they wanted to do.

At that moment the agents " they undertook to forcibly place them on one of the buses they had there beating and shoving them on board and left to an unknown location." According to Europa Press three of the women, Mildrey Noemí Sánchez, Caridad Caballero and Isabel Peña, where later freed in Cueto, Holguín and various men, at least four, were also detained.

Why were these women subjected to all of this harassment and mistreatment and such a huge state security operation? José Daniel Ferrer reported to Europa Press what the ladies had planned to do:

Luis Felipe Rojas reported via tweet a statement from Aimee Garces, one of the women subjected to the attack on Sunday, "I have bruises all over my body, they offended us like never before."

Acts of repudiation were also carried out at the home of Tania Montoya Vasquez y Raumel Vinajera Stive, where there were another 10 opposition activists, reported José Daniel Ferrer over twitter.

Unfortunately the Ladies in White prayers were answered this past Sunday with a "no" but they have pledged to continue to pray and march despite the repression. Thanks to the courageous and moral stand the day that the prayers of the Ladies in White and the silent protesters in Minsk will be answered in the affirmative will soon be at hand both in Cuba and in Belarus.