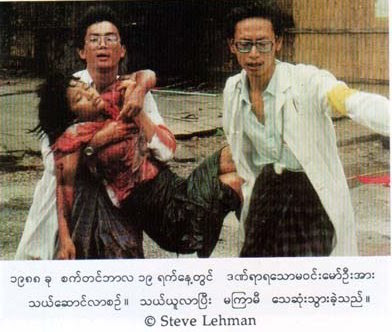 Twenty three years ago today, on August 8, 1988, thousands of Burmese civilians died protesting for democracy and against military rule. Burmese opposition leader, Daw Aung San Suu Kyi attended a ceremony remembering that terrible day, telling people that "I would like you all to think about what has happened and not forget" the victims of 08-08-88.

The Burma Center in Prague offers a brief description of 08-08-88 and its significance:

The “8888” uprising refers to a series of protests that took place in Burma during 1988 that culminated on the date 8/8/1988, giving this uprising its name. These protests, which began in March of 1988, were initially incited largely by students to express their disgust with the military government’s hostile economic, political, and monetary policies. The one-party rule led by the Burmese Socialist Program Party (BSPP) suppressed the democratic desires of the people, and the economic situation in Burma placed it on the “Least Developed Country” list by the United Nations Economic and Social Council by 1987. The government at that time was headed by General Ne Win, who ruled Burma from 1962-1988 as an oppressive and violent ruler. Despite Ne Win’s resignation in July of ’88, the protests and anger continued since his successor, Sein Lwin, was also hated by the Burmese people, and he refused to address the issues that the protesters were calling for action on.

Although the center of the uprising was in the Burmese capital city of Rangoon, rural areas were also the scene of protests and strikes. From August 1-7 of that year, the protests intensified as students called upon everyone to become involved and to participate in the mass demonstration planned for August 8. The people responded, and the streets were filled with monks, workers, intellectuals, and members of all ethnic groups and walks of life. The August 8 demonstration stretched into a 5-day strike that took the Burmese military government aback, with promises from the leadership that the people’s demands would be considered, although of course, these promises were never meant to be fulfilled. Rather, during this time, it is estimated that around 3,000 people were killed as the police and military massacred peaceful protestors under orders from the BSPP.


The Burma Center in Prague concludes that:

Many believed that had the United Nations or the United States become involved during these protests or refused to recognize the coup during its takeover, the military regime would have failed to take hold and would have collapsed. To commemorate the bloody “8888” uprising, groups around the world have been holding remembrances on August 8 since then, and on the 20th anniversary of the uprising, Burma Center Prague, like other groups around the world, held a special event to honor the past and present victims of the Burmese dictatorship.


The legacy of the 08-08-88 uprising and crackdown is analyzed by an Amnesty International researcher and its current impact on Burma:

Another effect of both the 8888 uprising and the ethnic persecution is that hundreds of thousands of people in the past two decades have been forced to flee their homes to seek shelter elsewhere in Myanmar or in neighbouring countries. No fewer than half a million people in a nation of approximately 51 million are internally displaced within Myanmar. As I have witnessed myself, most live in deplorable conditions and constant fear, wondering if the world even knows about them.

The struggle for human rights and freedom in Burma continues and requires international solidarity and scrutiny.
Posted by John Suarez at 9:33 PM