Democratic Cuba's leadership in the drafting of the Universal Declaration of Human Rights and lobbying for the establishment of a UN human rights commission in 1945. 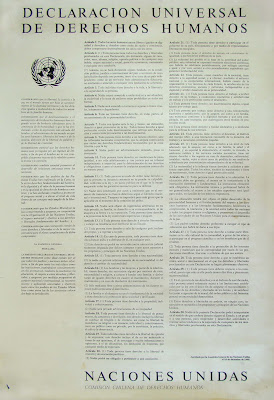 One of the great lies of the Castro regime, and there are many, is the claim that the Universal Declaration of Human Rights contains rights that are alien to Cubans. Fidel Castro claimed that "[y]our political concepts of liberty, equality, justice are very different from ours. You try to measure a country like Cuba with European ideas. And we do not resign ourselves to or accept being measured by those standards." However the Cuban dictator failed to mention that the Universal Declaration of Human Rights was an initiative led by Latin Americans, and Cubans in particular. Furthermore that language placed in the Declaration was taken from the 1940 Cuban Constitution. Cuban diplomats invited Winston Churchill to lunch at the Cuban Embassy in London in December of 1945 and proposed the creation of a human rights commission for the United Nations. Beginning in 1945 Cuba took part in the drafting of the declaration and submitted nine proposals of which five made it into the final document. 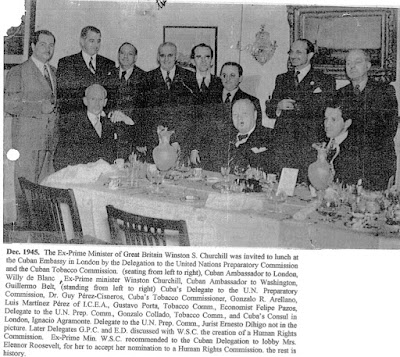 The late Bishop Agustín Román on December 16, 2006 spoke of this chapter in Cuban history and "the important role the delegation of the Republic of Cuba to the United Nations in 1948 in the drafting and promulgation of the Universal Charter, particularly by Drs. Dihigo Ernesto, Guillermo Belt, and Guy Pérez-Cisneros is a historical fact."

The final draft of the Universal Declaration of Human Rights in 1948 was recognized by these Cuban diplomats as one that would have been “accepted by that generous spirit who was the apostle of our independence: Jose Marti, the hero who -- as he turned his homeland into a nation -- gave us forever this generous rule: ‘With everyone and for the good of everyone.’”

This morning in The Miami Herald's letters to the editor section, Pablo Pérez-Cisneros Barreto, the son of Guy Pérez-Cisneros y Bonnel, wrote of this family and national legacy that is bound up in the Universal Declaration of Human Rights.


My late father believed that the declaration is the fruit of the great efforts of our civilization and human progress, a unique moment in which humanity came of age in its civic education; that it is also a source of inspiration for the formation of today’s citizens, and not cause for divisions among them. [...] Cuba had the distinction of being the country that proposed the finished declaration be put up for its final UN vote on Dec. 10, 1948. Hard to believe now but Cuba was once a leader when it came to human rights. And it is important to note that nine initiatives proposed in 1945’s Cuba became part of the final declaration, and that Cuba was the country that entrusted the Economic and Social Council of the United Nations in San Francisco to prepare the declaration as early as 1946. The third preamble of the declaration is a copy of one of the articles of the famed 1940 Cuban Constitution, and Cuba had the initiative to include in the declaration the right to honor one’s human rights and reputation, as well as protect citizens against arbitrary government interference in their private lives.  Cuba presented the first amendment to the draft declaration which was accepted, adding the right of citizens of any member country to follow the vocation they choose. Cuba presented a second amendment which was also accepted — the right of every worker to receive an equitable and satisfactory payment for their work.

In December of 2008 at the offices of the Cuban Democratic Directorate we met with Pablo Pérez-Cisneros Barreto, who discussed his father's role in the drafting of the declaration in the later 1940s. This history is not well known.

The Castro regime claims to be a nationalist regime proud of Cuba's accomplishments, but when it comes to the Universal Declaration of Human Rights and the role played by a democratic Cuba in 1948 in its drafting, it is silent.

December 10th, the day it was signed and that is observed around the world as Human Rights Day, in Cuba is a day of heightened surveillance and repression.

There are two traditions competing for control in Cuba. One tradition, embodied by the Castro regime, based on violence and the destruction of the other has dominated Cuba's political discourse for over half a century. It views dissent as treason and demands unanimity; the only acceptable ideas are the regime's. The second, an older tradition that built the institutions of Cuban democracy in the 19th Century using civic means, who founded companies with a social conscience such as Bacardi that contributed to the common good until forced out of their homeland, and of the democrats who helped draft the Universal Declaration of Human Rights in 1948.

This is the reason why the Castro regime has sought to bury this human rights legacy of the Cuban Republic and why it is so hostile to the Universal Declaration of Human Rights.
Posted by John Suarez at 2:15 PM