Twenty five years after the flotilla to pay tribute to the 37 victims of the "13 de Marzo" Tugboat Massacre: A reflection from back then

Twenty  five years ago, one year after the massacre, Cuban exiles gathered together and set out in a flotilla that peacefully invaded Cuban national territory to travel to the spot where the "13 de Marzo" tugboat sank and where the human remains of the 37 victims still reside never returned to their families to this day to hold religious services for them. 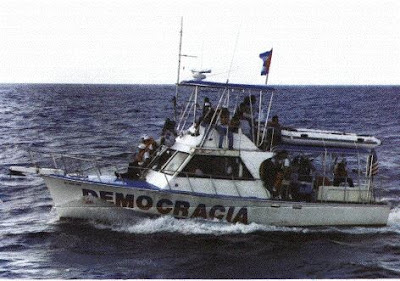 Hard to believe that its been 25 years.  Found an old essay written  just returned from the flotilla on July 14, 1995 and reproduce excerpts below:

The purpose of the trip is peaceful. The mastermind behind this project is Ramon Saul Sanchez, of the Cuban National Commission. I leave Miami convinced that the possibility of death or imprisonment in Cuba is the likely outcome of this flotilla. As best as one can prepare for such terrible possibilities I am at peace with these grim prospects. Why are we doing this? We do it for the liberation of the Cuban nation. Because we feel a pain in our soul every time we see another raft intercepted in the straits, and we think of all those who have perished. We do it because of the senseless murder of [37] women and children and of the thousands more who have been murdered by Castro''s tyranny. We do it because we must.


It is still dark when we leave. We pray together for the fulfillment of our non-violent ceremony. We jump aboard a forty foot lobster boat. Ramon Saul Sanchez comes to our boat embraces and shakes hands with some of us. He apologizes that they don't have more room on the lead boat so that we can all travel together. A WSVN reporter and cameraman join us on departure and begin to do interviews. "This is a bad sign," someone says. "How do you figure?" replies another. "This is channel 7 covering us," he continues,"don't you know their motto: if it bleeds it leads." Gentle laughter among those who hear the exchange.

Later they leave on a speed boat to interview someone else. We sleep and talk. As the hours pass and the sun climbs higher. Anticipation mounts, the smell of diesel and the choppy seas take their toll on the passengers. All of a sudden dozens of dolphins start jumping in the wake of the boat. God's creatures living free on the open sea. A sense of emotional uplift spreads through the boat. Temporarily we forget our worries and enjoy these creatures entertaining themselves and us.

As we near the12 mile limit we begin to see Cuban aircraft circling. We wave our flags and sing the Cuban national anthem. Joy fills our hearts our mission has been partially accomplished. We can see Democracia in the distance leading us further into Cuban waters. One of my compatriots asks if we have entered Cuban waters. Yes, we tell him. He throws a bucket over the side and draws the Cuban water out and pours it into a bottle shaped like the Virgin. This was his holy water: Cuban water.

At this point we begin to see a military helicopter circling the flotilla. We wave our flags and shout our greetings. The Brothers to the Rescue fly formation with some of the Cuban planes. We see a MiG high overhead, and I feel proud of these pilots in small propellar driven aircraft facing off with military helicopters and MiGs.

As we continue in, we can see the Havana skyline. Someone says they see someone signaling with a mirror from one of the buildings. We begin to make out four dots leaving the island and growing larger. We continue in further. La Democracia speeds ahead. As the ships grow larger; we can see that they are gunboats.

Our captain stops. His brother tells him to go further, "know when to say when," he responds. As he ponders whether to go further or not. We stare out across the water as La Democracia tries to evade the gunboats and make it to the 6 mile limit. We can see the two gunboats pass on both sides of the ship.

La Democracia turns around and speeds towards us. They're radio has been knocked out. We need to call the Coast guard. They've been rammed. They have wounded on board, among them Dade County Commisioner Pedro Reboredo, who is going into shock. Our captain radioed in and heads out as fast as the engines will take him.

I learn later that two of the Brothers to the Rescue planes flew over Havana and dropped bumper stickers over the capitol. This was done as a diversionary tactic when the Democracia was attacked by the Cuban gunboats. The bumper stickers read: "Comrades no. Brothers."


Today, as we've done since 1995 we held a silent vigil for justice for the 37 Cuban men, women, and children extra-judicially executed on July 13, 1994. Today, it was at the Embassy of Cuba in Washington DC. Wherever you are in the world I hope you'll join us in continuing this demand for truth and justice using nonviolent means.

In 2006, in the year that we marked  10 years since the Brothers to the Rescue Shootdown the Free Cuba Foundation at Florida International University had both Jose Basulto, of Brothers to the  Rescue and Ramon Saul Sanchez, of the Democracy Movement had a conversation about the realities of US-Cuba relations. A portion of the conversation was recorded and is available on Youtube.