The Castro regime stabbed Hong Kong in the back on July 1st, but it should surprise no one.
On July 1, 2020 the Cuban dictatorship introduced a  resolution at the UN Human Rights Council praising China for the passing of the Hong Kong National Security Law.  Fifty three governments backed this resolution endorsing the death of a free Hong Kong.

The Chinese Communist Party in a secretive legislative process circumvented Hong Kong's sovereignty and imposed this new law a day earlier on June 30, 2020, the 23rd anniversary of the British handover of Hong Kong. This action is a breach of the agreement made with the British.  Professor Johannes Chan, a legal scholar at the University of Hong Kong in a BBC news report explained that "effectively, they are imposing the People's Republic of China's criminal system onto the Hong Kong common law system, leaving them with complete discretion to decide who should fall into which system." Hong Kong media tycoon Jimmy Lai, in an interview with the BBC put it more succinctly, "It spells the death knell for Hong Kong." 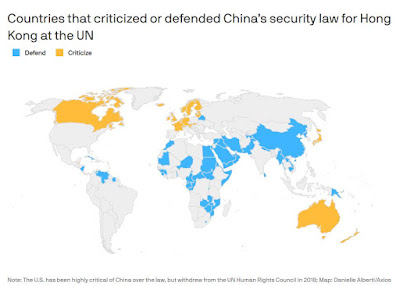 However, this is consistent with Cuba's actions on the UN Human Rights Council over the years when they have been members. Below is a partial accounting of their defense of Communist China and its atrocities:


The Castro regime was one of the few voices applauding the June 1989 Tiananmen Square Massacre in China congratulating them for "defeating the counterrevolutionary acts."

On February 2, 2009 during the Universal Periodic Review of China the Cuban Ambassador, Juan Antonio Fernandez Palacios encouraged the Chinese regime to repress human rights defenders in China with more firmness.

On March 21, 2014 at the United Nations Human Rights Council, the Castro dictatorship again applauded the human rights record of the People's Republic of China, and voted to block the effort of human rights defenders to hold a moment of silence for Cao Shunli. She was an activist who had tried to participate in China’s Universal Periodic Review, but was detained at the airport trying to get on a flight to attend the current session  and accused of "picking quarrels and provoking troubles." Within three months in detention and being denied medical care Cao Shunli died on March 14, 2014.

The Castro regime has had a relationship with China that stretches back to 1959 and saw a close relationship in the first years of Cuba's Communist revolution, but cooled with the Sino-Chinese split in 1966. Ernesto "Che" Guevara left Cuba siding with Mao Zedong and Communist China, while Fidel and Raul Castro backed the Soviet Union. Relations between the Castro regime and Communist China warmed again with the cooling of relations between Cuba and the Soviet Union during the Gorbachev years.  Cuba's defense of the Tinananmen Square massacre in 1989 was a key step to this new era of China-Cuba relations. Below is a presentation from earlier this year that explores this relationship in more detail.

However, the Cuban dictatorship's attack on human rights standards crosses ideological and geographical boundaries that extend far beyond China.

In the 1970s in addition to supporting guerrillas and terrorists the Castro regime also began an unusual relationship with the military dictatorship in Argentina helping to block efforts to condemn it at the United Nations Human Rights Commission for thousands of leftists disappeared by the regime.

On April 15, 2004 when the United Nations Human Rights Commission decided by a single vote to censure Cuba for its human rights record a Cuban human rights defender Frank Calzon was physically attacked by members of the Cuban diplomatic delegation. According to Freedom House: "Witnesses said a Cuban delegate punched Mr. Calzon, knocking him unconscious. UN guards reportedly protected him from further assault by additional members of the Cuban delegation."

On March 28, 2008 the Castro regime’s delegation together with the Organization of Islamic Congress (OIC) successfully passed resolutions undermining international freedom of expression standards at the United Nations Human Rights Council.

The non-invitation invitation of Manfred Nowak, the UN special rapporteur on torture, by the Cuban Ambassador and the Cuban Minister of Justice in January of 2009 to visit Cuba later that same year. Only to be put off without notice again and again through 2009 and 2010 leading to this expert missing opportunities to visit other countries and on June 9, 2010, making the following statement:

“I regret that in spite of its clear invitation, the Government of Cuba has not allowed me to objectively assess the situation of torture and ill-treatment in the country by collecting first-hand evidence from all available sources.”

On May 28, 2009 amidst a human rights crisis in Sri Lanka the Cuban government's diplomats took the lead and successfully blocked efforts to address the wholesale slaughter there.

On August 23, 2011 the Cuban government along with China, Russia and Ecuador voted against investigating gross and systematic human rights violations in Syria.

On February 5, 2012 ALBA Countries reiterated rejection of "foreign interference" in Syria's internal affairs, expressing support for President Bashar al-Assad and confidence that he would resolve the Syrian crisis. ALBA Countries include Cuba, Venezuela, Ecuador, Bolivia, and Nicaragua. Meanwhile in Syria President al-Assad  engaged in massacres throughout the country

On June 1, 2012 at a Special Session on the deteriorating human rights situation in Syria with a special focus on the massacre in El-Houleh the Cuban regime and its allies took a stand against holding the Assad regime accountable for its gross and systematic human rights abuses.

On July 15, 2013: “Panama captured North Korean-flagged ship from Cuba with undeclared military cargo.”  On March 6, 2014 the United Nations released a report indicating that the Castro regime was in violation of international sanctions placed on North Korea and had not cooperated with the investigation.


On March 17, 2014 the UN Human Rights Council “was divided” in its discussion of the atrocities in North Korea between those who want the case to be elevated to the International Criminal Court and those who reject outright the existence of a commission of inquiry and conclusions. The Castro regime vigorously defended the North Korean regime and denounced the inquiry.


On March 28, 2014 at the United Nations Human Rights Council a resolution for “The promotion and protection of human rights in the context of peaceful protests, tried to safeguard this right” passed but with the narrow defeat of amendments that would have watered it down led by South Africa with the backing of Algeria, Belarus, China, Cuba, Egypt, Ethiopia, Russia, Saudi Arabia and Venezuela. Out of that list of countries the one with the closest relationship with South Africa is Cuba.

Prior to the Castro regime there had been a democratic order that instead of undermining international human rights standards, championed them and played an important role in the drafting of the 1948 Universal Declaration of Human Rights.

The Castro regime seeks to return to the United Nations Human Rights Council for the 2021-2023 term and their application is a mockery of the process and full of falsehoods.  Cuba, under the Castros' has spun the yarn that they are the David to the United States' Goliath, but the reality is that they are the villain both on the international stage and domestically terrorizing and exploiting their own populace.

If there is a country that best fits the definition of a David then it is Taiwan that for the past 70 years has faced off against the Goliath of Communist China.  Betrayed by the Democratic West, they have managed to not only survive and endure, but thrive building a free society with rising living standards, and competent governance that is the envy of the world.