Please let the Castro regime know that you are concerned about her safety and want proof of life.

Keilylli de la Mora Valle is a courageous woman speaking out for human rights in a six decade old communist dictatorship. The Castro regime has tried to break her spirit, but having failed using the usual tactics of fear, harassment and imprisonment they are heightening the stakes interning her in a psychiatric facility, and are now alleging that she tried to take her own life. She is 27 years old.

On July 2, 2020 at 8:36am Cuban dissident Jose Daniel Ferrer Garcia posted a video of Raúl González alerting that Keilylli had been transferred to a Gustavo Aldereguia Hospital, that she had allegedly attempted suicide, and he warned that this could be a manipulation by the dictatorship and that this was an extremely serious situation.


We call on the international community generally, and the International Committee of the Red Cross specifically to request permission to meet with her and ascertain in what condition she is presently in.

On June 1, 2020 the Cuban opposition activist Jose Daniel Ferrer Garcia posted a video of the young activist that shows a clear eyed and brave activist facing defiantly the prison time that she was facing. She retweeted the video and told Jose Daniel, "Be assured brother while they repress me more, the stronger I become." While in prison she was able to secretly record the poor conditions there, smuggle it out but was beaten up, punished and threatened with a longer prison sentence.

MT @jdanielferrer #Cuba Cienfuegos #UNPACU @Unpacuoficial & @CUBADECIDE activist Keilillí de la Mora Valle received notification from the Tribunal that they ratified the year and a half prison sentence they recently imposed on her for her opposition activism. https://t.co/bFzgCaA2FP
— John Suarez ن (@johnjsuarez) July 3, 2020


Keilylli de la Mora Valle is a member of the Patriotic Union of Cuba and has been active on Twitter since March 2019 and describe herself as a free and independent Cuban who is 100% Anti-Castro.

A day later the UNPACU tweeted a copy of the documents showing that her appeal had been denied and she would be starting her unjust prison sentence.


Rosa Maria Payá Acevedo tweeted on July 2nd that the "young 27-year-old political prisoner, has been subjected to cruel treatment, is on her 2nd hunger strike & now police say she 'attempted suicide' but no one has seen her. Danger increases every minute she remains in the hands of the regime." Rosa Maria is absolutely right, and her original tweet in Spanish is embedded below.


The news that she has been sent to a psychiatric facility fills knowledgeable Cuban watchers with dread. The Castro regime has a long track record of using psychiatry as a political weapon and these institutions have also had a record of neglect in which patients have died from exposure.

The Politics of Psychiatry in Revolutionary Cuba published in 1991 by Freedom House and Of Human Rights documented the interrelationship between Cuban psychiatry and the Cuban State Security apparatus to target dissidents.

The Psychiatric Hospital in Havana run by Eduardo Bernabe Ordaz Ducunge for forty years used the tools of psychiatry to torture dissidents and human rights defenders.

In January 2010 pictures smuggled out of Havana's Psychiatric Hospital revealed that patients were dying of exposure to the elements, and had suffered greatly through their time there. Claudia Cadelo, now exiled out of Cuba, wrote in 2010 her reaction to seeing this photos:

When I opened the little folder called “Mazorra” a series of monstrosities hit me in the face and I couldn’t stop looking at the cruel graphic testimony. A friend who is a doctor visited and while he analyzed images I didn’t have the courage to look at, expressions like, “Holy Virgin Mary, Blessed God, What in God’s name is this?” issued from his outraged throat, mixed with obscure pathologies and the names of diseases both treatable and curable. Enormous livers, tubercular lungs, and wormy intestines are the proof, Senora Arlin, of the sacredness of life in Cuba. Meanwhile The Roundtable throws a fit because the death of Orlando Zapata Tamayo has unmasked a crumbling public health system, and they try to cover up the disgrace of seeing soldiers dragging and beating a group of women dressed in white with flowers in their hands. I ask myself, Gentlemen Journalists, when will they explain to Cubans the reasons why twenty-six mentally incapacitated people died in inhumane conditions during their confinement in Mazorra?

The dictatorship was forced to acknowledge what had happened thanks to the still unknown whistleblower and courageous independent journalists who made the images public and The New York Times reported on January 15, 2020 that "26 patients at a mental hospital died during a cold snap this week, the government said Friday. A Health Ministry communiqué blamed “prolonged low temperatures that fell to 38 degrees." This is the institution that Eduardo Bernabe Ordaz Ducunge shaped over 40 years, and that PAHO celebrated with an award. This episode was quickly forgotten, and the mantra of Cuba's "great" health care system continued to be repeated in the press.

Amnesty International had also raised concerns in their report Psychiatry: A Human Rights Perspective in 1995 of what they saw on their only visit:


In Cuba, there have been allegations in recent years that not only the criminally insane but also political prisoners have been sent to forensic wards of state psychiatric institutions where they are kept in unhygienic and dangerous conditions and where they are exposed to ill-treatment either at the hands of staff or fellow inmates. In 1988 Amnesty International visited the Havana Psychiatric (Mazorra) Hospital in Havana. The delegation was permitted to visit one of the forensic wards - the Sala Carbó Serviá. However, the existence of a second forensic ward, the Sala Castellanos, was denied by a hospital official. It was this ward which was alleged to present harsh conditions and to be used for the punishment of prisoners.

Amnesty International reported that prisoner of conscience Dr. Oscar Elias Biscet was sent to Mazorra on November 29, 1999 to Mazorra. He was sent to there by State Security agents and forced to undergo psychiatric examinations on several occasions. 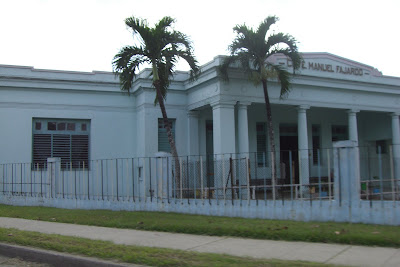 Amnesty also reported how on December 4, 1998 Cuban dissident Milagros Cruz Cano, who is blind, was detained by State Security agents while waiting for a bus. She was initially held at the Maria Luisa police station in Havana where she was: "beaten by police officers which resulted in a swollen cheek and a bruise and scab below her eye. She was then transferred to Mazorra psychiatric hospital in Havana where she was held in an isolated cell called Córdoba. The conditions of detention were said to be degrading as she was held in a cell with iron bars which other patients and guards could see into and where she had to carry out all personal hygiene. She was released on December 14, 1998 without charge."

Observers need to take into account that in addition to negligence and indifference to human suffering that led to a situation in which more than 40 patients died of malnutrition and exposure to cold in a tropical country that this psychiatric hospital was also employed in the mistreatment and torture of Cuban dissidents and human rights activists. Officials need to know that they will be held accountable for her safety.


The Cuban government has not permitted a visit by the Red Cross to their prisons since 1989. By comparison the United States has permitted over a 100 inspections at the prison on the US Guantanamo Naval Base since 2001. What is the Castro regime hiding in its prisons?

Will they allow independent international observers to visit with this young woman, and ascertain her mental and physical status?  The international community is beginning to pay attention on her plight. Below is a tweet from the OAS Secretary General Luis Almagro from July 2nd.

MT @Almagro_OEA2015 We demand that regime of #Cuba provide information on Keilylli de la Mora Valle, a political prisoner on the island, & that they stop the abuses & systematic violations of her rights & that of all prisoners of conscience on the island. https://t.co/ubNfoyf1EK https://t.co/EDufGjJqLU
— John Suarez ن (@johnjsuarez) July 3, 2020