"Civil disobedience is the assertion of a right which law should give but which it denies." - Mohandas Gandhi

Mohandas Karamchand Gandhi born on October 2, 1869 Mohandas Gandhi was born 152 years ago today and his legacy is still passionately debated in India.  The Economic Times, based in India, today published an editorial titled "Continuing relevance of Mohandas Gandhi" that highlights the challenges to Gandhian nonviolence today in his home country.

“Gandhi is remembered for Ahimsa, non-violence. However, Gandhi’s Ahimsa was not passive acceptance of violence, but its active resistance by the force of moral purpose and mobilization of public opinion. Today, we have elected representatives who venerate Gandhi’s assassin, but few supporters who follow his example of opposing violence.”

This debate is not limited to India. The September 29, 2019 story in NPR "Gandhi Is 'An Object Of Intense Debate': A Biographer Reflects On The Indian Leader" contrasts the debate around Gandhi with how the Chinese don't debate Mao Zedong, or the Vietnamese don't debate Ho Chi Minh or the Pakistanis don't debate Muhammad Ali Jinnah.

Perhaps part of the reason for the lack of debate is that China and Vietnam are totalitarian dictatorships where such debate is forbidden, and Pakistan has been divided between periods of democratic and military rule in questioning the founder could prove unhealthy. India on the other hand has been a democracy through out its period of independence.

Gandhi liberated an entire subcontinent from imperial rule without firing a shot. The United Nations has designated his birthday, October 2nd, as the International Day of Nonviolence. Nevertheless,  he did not win the Nobel Peace Prize and is recognized by the Nobel Committee as the "Missing Laureate." 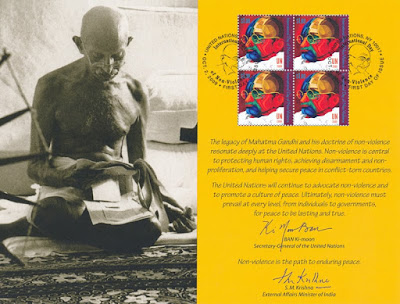 In 2009 the United Nations has released a one-dollar postal stamp of Mohandas Gandhi to commemorate his 140th birth anniversary. The stamp was designed by Miami-based artist Ferdie Pacheco.

He wasn't a rich man. He never held formal political office. He wasn't a saint or divine figure. He was just a man. An attorney who had taken a vow of poverty and celibacy. His full name was Mohandas Karamchand Gandhi.

Gandhi was transformed into a principled strategic non-violent activist in South Africa at the end of the 19th century struggling against racist laws and policies of the colonial authorities. An important theoretical result of the South African campaign was the development of Satyagraha. Gandhi announced on September 11, 1906 in his newspaper Indian Opinion a contest to submit names to describe this movement. The final name was the fusion of two words as explained by Gandhi: “Truth (Satya) implies love, and firmness (agraha) engenders and therefore serves as a synonym for force…the Force which is born of Truth and love or nonviolence.”

He was the antithesis of Mao Zedong who took power and killed tens of millions to impose his political ideology on the Chinese. Marxist-Leninists view "truth" as something malleable and in the service of achieving power.

Gandhi's explicit rejection of Marxist class struggle as hateful, his embrace of truth and love,
and his critique that socialists and communists did nothing to solve problems are powerful:


The socialists and communists say, they can do nothing to bring about economic equality today. They will just carry on propaganda in its favor and to that end they believe in generating and accentuating hatred. They say, when they get control over the State, they will enforce equality. Under my plan the State will be there to carry out the will of the people, not to dictate to them or force them to do its will. I shall bring about economic equality through non-violence, by converting people to my point of view by harnessing the forces of love as against hatred. I will not wait till I have converted the whole society to my view but will straight away make a beginning with myself. It goes without saying that I cannot hope to bring about economic equality of my conception, if I am the owner of fifty motor-cars or even of ten bighas of land. For that I have to reduce myself to the level of the poorest of the poor.

Gandhi's description of the nature of a regime that sought to use violence to crush capitalism offers an excellent description of what has taken place in Marxist Leninist states that promised paradise but delivered the opposite:


It is my firm conviction that if the State suppressed capitalism by violence, it will be caught in the coils of violence itself, and will fail to develop non-violence at any time. The State represents violence in a concentrated and organized form. The individual has a soul, but as the State is a soulless machine, it can never be weaned from violence to which it owes its very existence. [...] It can be easily demonstrated that destruction of the capitalist must mean destruction in the end of the worker and as no human being is so bad as to be beyond redemption, no human being is so perfect as to warrant his destroying him whom he wrongly considers to be wholly evil. 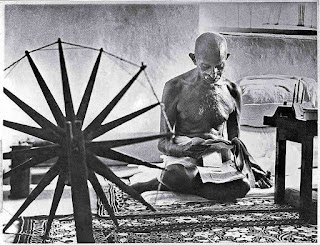 The heirs of Mao Zedong, who were inspired by his violent revolutionary tradition generated great suffering: Ernesto "Che"Guevara in Cuba,  the Khmer Rouge in Cambodia, the Black Panther Party in the United States and Shining Path guerillas in Peru are but just four of many bloody examples.

Contrast these with the heirs of Mohandas Gandhi, who were inspired by his non-violent resistance to injustice and the good they achieved:  Martin Luther King Jr. in the United States,  Steve Biko in South Africa, Abdul Ghaffar Khan in Pakistan, Oswaldo Payá Sardiñas in Cuba, Vaclav Havel in Czechoslovakia, Lech Walesa in Poland, and Corazon Aquino in the Philippines are but just seven of many inspirational examples.

Mohandas Gandhi changed political protests and empowered millions with Satyagraha and the use of strategic nonviolence to battle powerful and violent regimes and great injustices in an effective manner that frustrates those who want to preserve or change the status quo using violence. 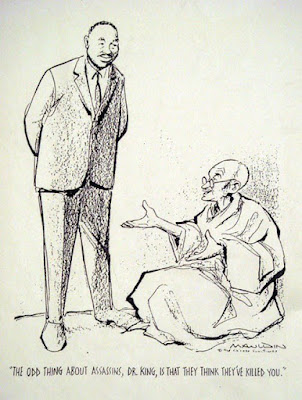