Luis Manuel Otero Alcántara turned 34 today in a Cuban prison: A look back in coverage of the Cuban artist in this blog

"The nonviolent struggle continues. The regime with its violence and we with our nonviolent art will achieve the desired freedom." - Luis Manuel Otero Alcantara, December 8, 2020 over Twitter

Luis Manuel Otero Alcántara turned 34 today in a Cuban prison. He has been jailed since July 11, 2021 for peacefully assembling to protest the dictatorship.  This was not his first detention. This blog has loosely followed Luis Manuel's activism.

In 2017, Luis Manuel Otero and art historian Yanelis Nuñez Leyva, a staff writer for the Ministry of Culture, pushed the boundaries of the status quo.  The two artists attempted to redefine the term "dissident," removing its stigma. On November 17, 2017 they were arbitrarily detained at the police station Chacón in old Havana and Luis Manuel's studio searched by state security.

On December 20, 2017 he was arrested again, and Rosa Maria Payá Acevedo tweeted about it at the time, and this blog also reported it.

This blog followed the Decree 349 campaign and artists arrested in December 2018 for protesting this law restricting it.

This blog came into existence defending artistic freedom, and this position is absolute. The first blog entry in 2009 responded to violent protests against Colombian musician, Juanes, including death threats against his person, when he announced that he would be holding a concert in Cuba.  I spoke out at the time condemning the death threats, pleading for tolerance and free expression, and organized a petition denouncing the death threats. At the same time gave a critical and nuanced assessment of the concert.

This blog has reported on the arbitrary detentions of  Luis Manuel Otero Alcántara, over the years, and in March 2020, when he was declared a prisoner of conscience, echoed calls by Amnesty International to King Felipe of Spain to intercede on his behalf.  In November 2020, following the raid on his home when he was disappeared this blog asked "where is Luis Manuel Otero Alcántara?" and shared the image below. 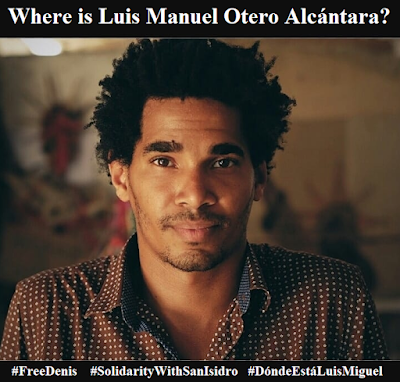 In April 2021 this blog highlighted the Amnesty International campaign #TheEternalFlame that featured Luis Manuel Otero Alcántara in a powerful video. The months that followed led to new outrages, and the Cuban artist finding creative new ways to protest, and recurring to the extreme and dangerous practice of hunger and thirst strike.

Thankfully, the world is paying attention to Luis Manuel's plight.

There is reason to be deeply concerned for his plight, but he is not alone and other political prisoners such as Virgilio Mantilla Arango, Maykel Castillo Pérez (Osorbo), and their health status. It is also no coincidence that they are black Cubans.

The regime is trying to blame dissidents for their troubles but Martin Luther King Jr. in his 1963 Letter from the Birmingham Jail places the responsibility for societal tensions on the purveyors of injustice, and in the Cuban case that is the dictatorship.

"Actually, we who engage in nonviolent direct action are not the creators of tension. We merely bring to the surface the hidden tension that is already alive. We bring it out in the open, where it can be seen and dealt with.”