"This book is a beacon for the future of Cuba, a vision of the precious freedom for which Oswaldo Payá fought all his life, and this will inspire new generations." - David Hoffman of The Washington Post, Pulitzer Prize winner 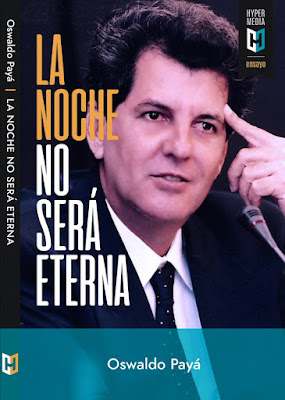 The digital version of the book by Oswaldo Payá Sardiñas is available today in digital format on Amazon and published by Editorial Hypermedia Inc.

On December 8, 2021 over social media Rosa María Payá announced that the digital edition of the book titled "The night will not be eternal" would be released, and become available.

There was a formal book presentation on Saturday, December 11, 2021 at 2:000pm in the John F. Kennedy Library in Hialeah, Florida. The presentation was made by journalist Juan Manuel Cao , with Juan Rumín Domínguez, Hypermedia editor Ladislao Aguado  and Ofelia Acevedo.

14ymedio reported during the original book launch on July 3, 2018:


The book, subtitled “Dangers and Hopes for Cuba,” has a preface by Paya’s widow, Ofelia Acevedo, and its purpose, as explained by its author, is none other than “to help to discover that we can, indeed, live through the process of liberation and reconciliation and move into the future in peace.”

“In this book my father reflects on how and why we Cubans have come to this point in history and how we can emerge from it,” says Rosa Maria Paya, director of the Cuba Decides movement which promotes holding a plebiscite so that the Cuban people can decide what political system they want for their country.  “A process of liberation is possible,” says the dissident about what her father left in writing before being “assassinated,” in her words.

This book, and documentaries such as Dissident ( 2002) by the National Democratic Institute and The Cuban Spring (2003) by Carlos Gonzalez, of the CASLA Institute. Both in the book, and in these two documentaries readers and viewers can understand how Oswaldo lived, and the real danger he and others faced for exercising nonviolent dissent in Cuba.

The Human Rights Foundation (HRF) published a legal report on July 22, 2015 highlighting the inaccuracies and inconsistencies of the official government investigation following Payá’s death in 2012. HRF documented numerous due process violations, including damning witness accounts, a grossly inadequate autopsy examination, and other key pieces of evidence that were overlooked by the Cuban judicial system. HRF’s report concludes that the “evidence, which was deliberately ignored, strongly suggests that the events of July 22, 2012 were not an accident, but instead the result of a car crash directly caused by agents of the state.”

Ten long years will have passed this upcoming July 22, 2022 and the silent complicity of many governments in the world is deafening, and further proof of the international decline in human rights standards, but the friends and family of Oswaldo Payá Sardiñas, and Harold Cepero Escalante continue to demand justice for their loved ones murdered on July 22, 2012.