What does the regime fear? 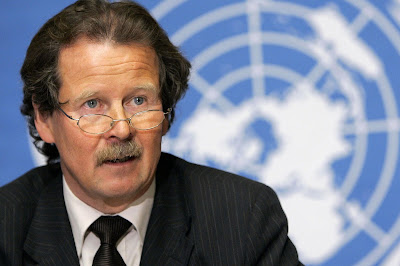 “I regret that in spite of its clear invitation, the Government of Cuba has not allowed me to objectively assess the situation of torture and ill-treatment in the country by collecting first-hand evidence from all available sources.” - Manfred Nowak, UN Special Rapporteur on torture, June 9, 2010


"I am very concerned about the undermining of the absolute prohibition of torture by interrogation methods themselves in Abu Grahib, in and others, but also by rendition and the whole CIA secret places of detention. All that is really undermining the international rule of law in general and human rights but also the prohibition of torture," - Manfred Nowak, October 31, 2007

An invitation was officially and publicly extended to Mr. Nowak by the Cuban government by the Cuban Foreign Minister on January 28, 2009 and in February of 2009, as Cuba underwent its Universal Periodic Review the Cuban justice minister, Maria Esther Reus, who presented the regime's country report stated that: "The promotion and protection of human rights are guaranteed" and in press accounts reconfirmed that Havana had promised to allow a visit by the United Nations' independent expert on torture, Manfred Nowak.

According to the Office of the High Commissioner for Human Rights Manfred Nowak was appointed Special Rapporteur on Torture on December 1, 2004 by the former UN Commission on Human Rights. He is independent from any government and serves in his individual capacity. Mr. Nowak is currently Professor of Constitutional Law and International Human Rights at the University of Vienna (Austria), and Director of the Ludwig Boltzmann Institute of Human Rights.

The Cuban regime made a number of commitments to have a seat on the United Nations Human Rights Council and one of them was to accept the various instruments of the Council which includes the special rapporteurs and the universal periodic review. This visit was to be the first mission to by an independent expert mandated by the UN Human Rights Council to monitor specifically torture and other cruel, inhuman or degrading treatment or punishment. Unlike Cuba there are 68 countries with open invitations to all special rapporteurs.

One thing that might have changed the regime's calculus on the visit was a January 2009 statement by Manfred Nowak in which he called for both President George W. Bush and Donald Rumsfeld to be prosecuted for permitting torture adding that: "Judicially speaking, the United States has a clear obligation." There would be no chance of calling this expert on torture a lapdog of the United States government.

Victims of torture in Cuba now living abroad can offer living testimony and evidence of torture inside the island. The videos below are small sampling of testimony available:

Former Amnesty International prisoner of conscience Omar Pernet Hernandez describes how Cuban doctors, following a car accident while being transferred by state security agents to another prison, provided a "treatment" that was slowly crippling him. An English transcription is available:

José Gabriel Ramón Castillo below describes his experience in prison and that what he suffered was not exceptional but what other political prisoners are suffering. "I was tortured in prison. I arrived in prison healthy without any illness. I left the prison with diabetes, hepatitis, and a general dermatitis because they obligated to sleep on a mattress made up of live sponges, and I suspect that I was inoculated with the hepatitis-b virus while in the prison."

They feared an independent expert on torture with full access to all the prisons in Cuba interviewing prisoners living in the above described conditions. The International Committee of the Red Cross visited Cuba twice during 51 years of the Castro brothers dictatorship. The first visit began on May 12, 1959 and ended in July of 1959 there would only be one more visit and that would be 30 years later in 1989. Amnesty International in their 2010 Country report on Cuba announces that they have not been allowed to even visit Cuba, much less the prisons since 1990. In 2009 Human Rights Watch revealed that after requesting: "permission to visit Cuba, in hopes that the government would break with its practice of denying international human rights delegations access to the island. Unfortunately, Cuban officials never responded to any of these requests" they went without government permission on a fact finding mission in June - July 2009. There report New Castro, Same Cuba is available online.

Officials of the Cuban regime feared that Fidel Castro, Raul Castro, Ramiro Valdez and everyone in the chain of command responsible for the torture of Cuban prisoners throughout the island were going to be named by Manfred Nowak, along with calls for their prosecution in Cuban national courts, and failing that before international courts. Regime diplomats claim not to be afraid, but the proof is in the pudding so to speak. Cuba signed the Convention against Torture and Other Cruel, Inhuman or Degrading Treatment or Punishment on January 27, 1986 and ratified it on May 17, 1995.

With Professor Manfred Nowak they had reason to fear such an outcome and now they'll try to game the system as his mandate ends on October 30, 2010. Furthermore repressive government's like Cuba are trying to gut and politicize the special rapporteur mechanism and have had some success in the new Human Rights Council.