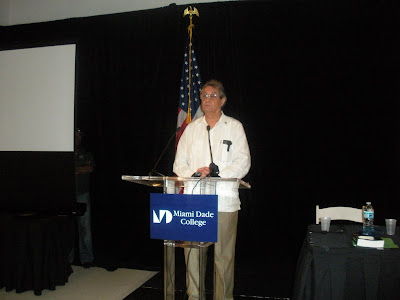 First the Cuban dictatorship on January 28, 2009 invited Manfred Nowak, the UN Human Rights Council's expert on torture to visit Cuba towards the end of 2009 only to delay it until 2010 and withdraw it later. This was followed by a claim that torture does not exist under the regime which flies in the face of a number of well documented instances of torture and extrajudicial executions.

It is an important moment to examine the historical record, and the testimony of survivors like Amado Rodriguez especially when considering that Cuban prisons are closed to international human rights organizations. Amado in his presentation discusses how torture is something that has been institutionalized both in state security and in the prisons.

The international community has arrived at a consensus on what torture is and in an international convention both defined it and called for its prohibition. There is still a long way to go for that day to arrive when torture is a thing of the past, but at least their is a common internationally agreed reference point as to what is torture.

A definition of torture

For the purposes of this Convention, the term "torture" means any act by which severe pain or suffering, whether physical or mental, is intentionally inflicted on a person for such purposes as obtaining from him or a third person information or a confession, punishing him for an act he or a third person has committed or is suspected of having committed, or intimidating or coercing him or a third person, or for any reason based on discrimination of any kind, when such pain or suffering is inflicted by or at the instigation of or with the consent or acquiescence of a public official or other person acting in an official capacity. It does not include pain or suffering arising only from, inherent in or incidental to lawful sanctions.

Taken from Part I, Article 1, Convention against Torture and Other Cruel, Inhuman or Degrading Treatment or Punishment (1984)

Amnesty International Miami both co-hosted the event with the Florida Center for Survivors of Torture and gave an introduction to the event.

Following Amnesty's introduction Abigail Alexander from the Florida Center for Survivors of Torture, spoke about the support services and resources available to torture survivors living in South Florida. She spoke about having many clients from Cuba, Haiti, Central and South America, and recently has seen clients from Africa. All are living here in the South Florida area.

Amado Rodriguez was born in Santiago de Cuba, Cuba in 1943. At 13, he joined the 26th of July Movement against the Batista regime and was later sent into exile to save his life. At the height of the revolution, he returned and became an activist against the Castro regime.


He was arrested and spent a total of 23 years as a political prisoner during two different terms. He was 18 years old when he was first arrested in 1961 and sentenced to 30 years, of which he served 18. Four years later, Amado was arrested and sentenced to 15 years. He was released in 1989 and sent directly to the United States after serving five years, four of which he spent in solitary confinement.

Additional videos and commentaries will be posted shortly.

Below Amado Rodriguez describes how by June of 1985 he was the only "plantado" prisoner at Boniato prison in jail cell #2 a small sealed punishment cell. He was only in underwear isolated without knowing whether it was day or night. Nine months later he was moved to sealed cells within the Boniato prison were he began a new process of minimal caloric consumption but by October of 1986 since he refused to break he was subject to the use of handcuffs and placed in a stress position.

For the first (and last time since 1959) in 1988 various international human rights organizations were able to visit Cuba they were interested in the situation of political prisoners and especially the historical political prisoners.