"The hope of impunity is the greatest inducement to do wrong." - Cicero 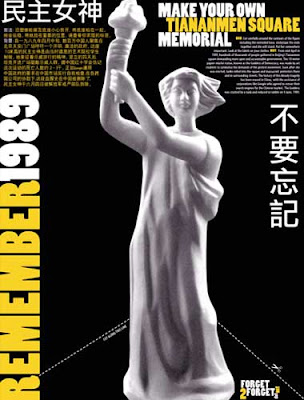 A time to remember the hundreds of students and workers murdered by the People's Liberation Army and the more than 800 imprisoned of which at least 7 remain imprisoned still today. There names are Zhu Gengsheng, Li Yujun, Jiang Yaqun, Chang Jinqiang, Miao Deshun, Shi Xuezhi, and Yang Pu.

It also continues to be the time to demand justice for the dead and to work for the freedom of all those students and workers still imprisoned 21 yrs later for supporting democracy.

Human Rights in China released a report by prominent Chinese dissident Jiang Qisheng (江棋生) to mark the 21st anniversary of the June 4, 1989 massacre and describes the human toll:

Those killed were men, women and children from all walks of life, including students, peasants, truck drivers, performers, engineers, peddlers and even a party secretary and deputy to the Beijing People’s Congress. They were from major cities like Beijing and Shanghai, and as far away as Liaoning Province. The report provides their personal details: names, ages, home locations, occupations, circumstances surrounding their deaths, family backgrounds, and information on surviving family members.

The youngest victim was Lu Peng, a 9-year-old third grade student (#34) who was shot in the chest by martial law troops around midnight, June 3-4, and died immediately. The oldest was Zhang Fuyuan, a 66-year-old retired hospital worker and Communist Party member (#166) who was working as a guard in a construction site of the Design Institute of the Ministry of Metallurgical Industry. On the evening of June 3, Zhang was among a group of residents near Changanjie who were chased and fired upon by martial law troops as they ran into a hutong.

Below is a list of victims of the massacre prepared by relatives of the victim. They have created a website at http://www.massacremap.com/ where the location of a number of the victims has been determined. It is a partial list. Here is a description of how and by whom this was compiled:

Ding Zilin, the mother of a murdered student, began to investigate the massacre. Eventually, she and other victims’ relatives formed the Tiananmen Mothers. They have gathered information about nearly 200 victims of China’s Communist regime. This map, which is based on their work, shows the places where most of these victims were killed or the hospitals to which their bodies were taken. Several known victims remain unaccounted for.

STREET LOCATIONS OF THE VICTIMS OF THE MASSACRE (Partial List)

Victims whose deaths are not located on the map:

How Chinese Students Shocked the World with a Magnificent Movement for Democracy and Liberty that Ended in the Tragic Tiananmen Massacre in 1989
http://www.standoffattiananmen.com/

A piece of red cloth by Cui Jian (music video - song sang by him in the Square)
http://www.youtube.com/watch?v=l8UPST1ZKSw
Posted by John Suarez at 7:32 PM