Cuba: A place where asking questions can lead you to prison 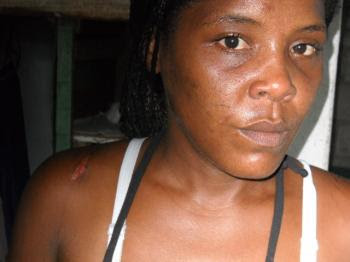 Update #3: SOS from Jorge Luis Garcia Perez "Antunez" on twitter on June 16, 2011: Regime police brutally beat Yris in the head a few days ago. She has not recovered. Needs protection and a medical doctor urgently. Guillermo Fariñas Hernández on twitter today reported: "State Security prevented Antunez from taking his wife, recently hit in the head, for a medical consultation to a hospital in Havana."

Update #2: SOS from Jorge Luis Garcia Perez "Antunez" on twitter on Saturday May 28, 2011 : "Yris my wife with headaches and numbness in right cheek. I hold Castro brothers responsible for what happens to Yris as a result of police brutality she suffered. What was Yris's crime? Go outside peacefully to the streets with clothes inside out in protest? Caridad Caballero Batista, whereabouts continue to be unknown. We fear for her life."

Update: Yris is accounted for and back with her family as of Friday, May 27, 2011. Bloodied, bruised and disoriented from the beating suffered at the hand of Cuban state security but thankfully alive according to an early afternoon tweet from her husband.
In Cuba, marching nonviolently to remember victims of the dictatorship such as Orlando Zapata Tamayo and Pedro Luis Boitel can have dire consequences even for a mother. Scores of Cuban human rights defenders and activists were detained, roughed up, and in at least one case both their whereabouts and health status remain unknown.

Yris Tamara Pérez Aguilera, heads the Rosa Parks Feminist Movement for Civil Rights, a human rights movement in Cuba, named after Rosa Parks. She's suffered repression at the hands of the dictatorship before when she spoke out on behalf of a young man abused by the police and was the victim of racial epithets hurled at her by regime officials. There is a case to be made that the regime in Cuba has issues with racism.

Her husband, arrested along with her and still detained (but his location and health status are known) is Jorge Luis García Pérez, an opposition leader in the locality of Placetas, who was imprisoned on March 15, 1990 for "oral enemy propaganda" when he spoke out in favor of Eastern European style reforms in Cuba. García Pérez, known as "Antunez", was finally released more than 17 years later on April 22, 2007, having served one of the longest sentences for the present generation of political prisoners on the island. While in prison he founded along with others, an organization called the Pedro Luis Boitel Political Prisoner’s Movement. In November of 2009 he founded the Orlando Zapata Tamayo National Civic Resistance and Civil Disobedience Front.adding the name after the Front's founding in honor of a prisoner of conscience who died on hunger strike on February 23, 2010.

A State Security agent who goes by the nickname “ the weightlifter” on the morning of May 25, 2011 at the end of an activity in remembrance of both Orlando Zapata Tamayo and Pedro Luis Boitel beat up Yris Tamara Pérez Aguilera so badly that according to Cuban activist, Donaida Pérez Paseiro, she lost consciousness and when Yris came to she was suffering from nausea, a headache, dizziness and her hands were numb. She was arrested and jailed then taken to the hospital only to be returned to a cell but here whereabouts have been unaccounted for since then. 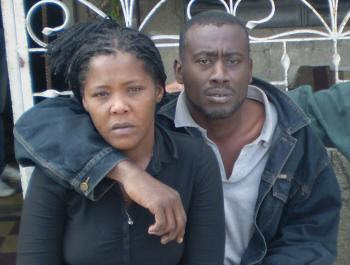 Yris Tamara Pérez Aguilera and her husband, Jorge Luis García Pérez
When activists Donaida Pérez Paseiro and Yaimara Reyes Mesa went to the General Hospital in Placetas to ask about Yris Tamara Pérez Aguilera's condition following the beating and loss of consciousness the two activists were arrested, beaten and held until 11pm on the evening of May 25th when they were released. They said that at that moment they saw a handcuffed Yris Tamara Pérez Aguilera in a patrol car. Since then her whereabouts are unknown and neither friends nor family have seen her or learned about her location when questioning the authorities.

Today, activists were detained as they walked towards State Security headquarters to try and find out the whereabouts of Yris Tamara Pérez Aguilera and what had been done to the young activist as well as to request the release of all the detained activists. The march was led by Librado Linares, one of the prisoners of conscience released this past spring after more than 7 years in prison, who was the one designated to speak to the State Security agents representing the group. Víctor Castillo Ortega, José Lino Ascencio López, Mayda Conlledo García, Yanisbel Valido Pérez, Alberto Reyes Morales, Michel Oliva López, Félix Reyes Gutiérrez, Guillermo Fariñas Hernández (the 2011 Sakharov Prize winner), Guillermo Del Sol Pérez, Ana Alfonso Arteaga, Chichi Bernal Serpa and Librado Linares García were all arrested and at this hour remain in detention.

Video above is from a February 2011 arrest of Yris
This is not the first time that state security agents have beaten up women exercising their freedom of expression. For example Sonia Garro and Mercedes Fresneda on October 7, 2010 marching with a banner that read "Down With Racism & Long Live Human Rights" were detained by police and badly beaten. According to Garro and Fresneda they were detained at the police station for seven hours where they were beaten. Sonia Garro suffered a fracture of the nasal septum and Mercedes Fresneda a broken left wrist among other injuries according to the EFE newswire.

However, this time it seems to be a coordinated effort to terrorize and repress at all levels. Today, Marcos Maikel (age 33) and Antonio Michel Lima Cruz (age 28), were sentenced to three and two years in prison (respectively) for "disrespect of patriotic symbols."

There is slow motion crackdown underway in Cuba. Some questions that arise: How long are the detentions and prison sentences and how violent are the Cuban State Security beat downs of nonviolent activists going to be? The death of Juan Wilfredo Soto Garcia three days after a beat down by the political police of the Cuban dictatorship along with beat downs of Angel Moya Acosta and Sara Marta Fonseca indicate this is policy, not an isolated incident by over enthusiastic police.

In Cuba asking these questions and requesting the freedom of innocent nonviolent activists can get you arrested and beaten up. Celebrate the courage of those willing to risk all for their fellow citizens and at the same time living in the free world please take a moment and speak out for them.

What better way to celebrate the upcoming 50th anniversary of Amnesty International?
Posted by John Suarez at 9:16 PM