Basque terrorists and their shifting fortunes in Cuba

Cuba is on the United States State Department list of state sponsors of terrorism and has been since 1982. There is a long history dating back to the Castro brothers using terrorist tactics in the struggle against the dictatorship of Fulgencio Batista in the 1950s and perhaps even before that. The organizing of an international guerrilla and terrorist front at the Tricontinental meeting in Havana and the training of individuals such as Abu Nidal whose terrorist tactics would be adopted a generation later by Osama Bin Laden and the Al Qaeda network offers a demonstration of the fruits born from meetings held in Cuba in 1966 and 1967. Terrorism has long existed in human history but in 1966 and 1967 for the first time it was organized internationally in a systematic fashion. Now in 2011 part of that history is again surfacing with the shifting fortunes of members of the Basque terrorist group known as E.T.A. residing in Cuba. Below is an English translation of an essay by Cuban blogger Yoani Sanchez that offers a first hand account and reflection. 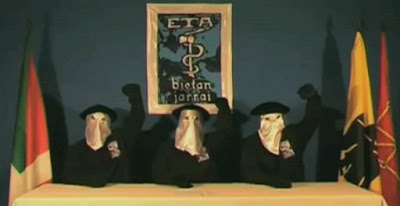 From Hosts to Jailers
by Yoani Sanchez, Generation Y

I was eight months pregnant when I met two Basque radicals living in Cuba, Rosa and Carlos, or at least that’s what they called themselves then. They invited us to their Miramar mansion for a party with troubadours and chorizos. They had some sources for Serrano ham and dried fruit, foods we only knew of from the movies. But not even the aromas and flavors could dispel our rising doubts as we observed them. How did these people manage to live in a such a place, with a car with private plates and such a well-stocked pantry? What had they done to access privileges unthinkable for nationals?

My son was born a month later, the Serrano ham didn’t reappear in my life for many years and a decade later I ran into Carlos in the street. I called him by name but he didn’t answer. He jumped as fast as he could into a car and lost himself in the bustle of Avenue Reina. Of Rosa, I knew that she had moved and was now introducing herself as Daniela. Her new facade was distributing tour packages. But, as happens in Havana, stories were rife, gossip circulated, secrets made the rounds, and I learned that they were wanted by Spanish justice and the mansion to which they’d been assigned functioned as an official guest house. The two of them could not return–under their real identities–to Spain.

Nonetheless, their pampered refuge came to an end. Today their hosts have become their jailers. The same government that one day sheltered and provided them resources has refused, for months now, to falsify new passports so they can go to France or some other place. I don’t know under what new names Rosa and Carlos are known, where they are living, or how many of their previous privileges they have now lost. I imagine they have ended up confined to this Island, distrustful of those around them, cursing their fellow travelers who gave them shelter, those “generous” protectors of earlier days, who ended up imprisoning them here.