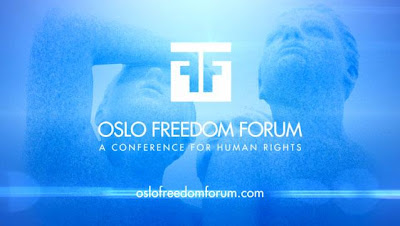 Human Rights Summit Brings Nobel Laureates and Human Rights Defenders to Oslo, Norway
Oslo, Norway (May 9, 2011)—The 2011 Oslo Freedom Forum commences today in Norway, gathering an assembly of Nobel Laureates, world leaders, rights defenders, tech entrepreneurs, public intellectuals, and survivors of oppression, to bring global humanitarian issues to the world’s stage. The event has been described by The Economist as "a spectacular human rights festival…on its way to becoming the human-rights equivalent of the Davos economic forum."

Later this evening, Shirin Ebadi and Mayor of Oslo Fabian Stang will speak at the opening reception of the forum at Oslo City Hall. The audience will include hundreds of international guests from the realms of advocacy, business, academia, politics, media, and technology.

This year’s forum will tap into the transformative power of social media to extend the reach of the event and its power to affect change. The 2011 conference will be live-streaming at www.OsloFreedomForum.com, and video segments of all panel discussions and individual speaker presentations will be immediately archived and available on the website following the event. Online viewers are encouraged to interact with panelists during discussion sessions by emailing questions to questions@oslofreedomforum.com or by following the forum on Twitter at @OsloFreedomFrm and using the hashtag #OFF2011.

The Oslo Freedom Forum is a program of the Human Rights Foundation, a New-York based nonprofit organization committed to defending human rights globally, with a special focus on the Americas. The forum is made possible in part by the City of Oslo, Color Line, Fritt Ord, the Norwegian Foreign Ministry, and the Thiel Foundation, in partnership with Amnesty International Norway, Civita, the Norwegian Helsinki Committee, and PLAN Norway. For more information on the forum and for a full list of participating speakers, please visit www.OsloFreedomForum.com.

HRF is an international nonpartisan organization devoted to defending human rights in the Americas. It centers its work on the twin concepts of freedom of self-determination and freedom from tyranny. These ideals include the belief that all human beings have the rights to speak freely, to associate with those of like mind, and to leave and enter their countries. Individuals in a free society must be accorded equal treatment and due process under law, and must have the opportunity to participate in the governments of their countries; HRF’s ideals likewise find expression in the conviction that all human beings have the right to be free from arbitrary detainment or exile and from interference and coercion in matters of conscience. HRF does not support nor condone violence. HRF’s International Council includes former prisoners of conscience Vladimir Bukovsky, Palden Gyatso, Václav Havel, Mutabar Tadjibaeva, Ramón J. Velásquez, Elie Wiesel, and Harry Wu.