A child murdered for a handful of fruit 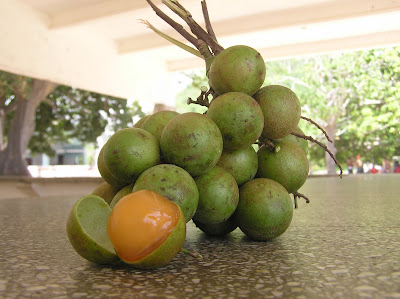 The mamoncillo (pictured above) is one of the minor fruits of the family Sapindaceae and found growing throughout the West Indies including Cuba.

Correction and Update 7/16/11 at 6:03pm: Have learned from Ivan Hernandez Carillo via twitter that Amado Interian, who shot and killed 14 year old Angel Izquierdo yesterday, was not a retired major in the police but in fact a retired Lieutenant Colonel in MININT (The Ministry of the Interior) otherwise known as Cuban State Security. The translated tweet is reproduced below:

Tonight came across a series of disturbing twitter posts from Laritza Diversent,a young attorney who lives in Havana, who since 2007 also writes as an independent journalist and has a blog Jurisconsulto de Cuba that is also translated into English as Laritza's Laws & Cuban Legal Advisor. It was so disturbing that it prompted this blog entry and her tweets have been translated and reproduced below.

TR @jurisconsultocu I'm at the wake of Angel Izquierdo Medina, age 14, killed by one shot from an ex-police official.

TR @jurisconsultocu The people of Mantilla, angered by murder of 14 year old adolescent at the hands of one former police official. #Cuba

Angel Izquierdo Medina, a 14-year old child was shot and killed by Amado Interian, a retired Lieutenant Colonel from State Security, in Mantilla, Cuba because he stole some mamoncillos. This evening because 400 friends, family members and neighbors decided to attend the dead child's wake and are upset about the circumstances surrounding his death were subjected to Cuban state security agents laying siege at the dead child's wake. The reaction by the regime's security forces no longer makes this a simple indictment of one retired state security agent but of an unjust system with a total disregard for human life. In a normal society it would be Amado Interian in custody and under investigation for the use of excessive force and the murder of a minor.

It was only this past Wednesday that the 17th anniversary of the July 13, 1994 "13 de Marzo" tugboat massacre in which 37 men, women and children were extra-judicially executed by agents of the Cuban government who until now have not had to answer for this crime before a court of law. On the same day when Cubans were remembering this crime a 23 year old Cuban, Adonis Guerrero Barrios, was found dead, frozen to death, in the undercarriage of an Iberia jet that had arrived in Spain from Cuba.

A heart breaking week for Cuban mothers and fathers mourning their children. How much longer will this unjust system continue?
Posted by John Suarez at 2:59 AM