"Evil is an anti-life force and if we start going out to kill it, exterminate it we then become contaminated by it because we become killers."- M. Scott Peck , The Open Mind, PBS 1983

"A rose does not need to preach. It simply spreads its fragrance. The fragrance is its own sermon." - Mohandas Gandhi 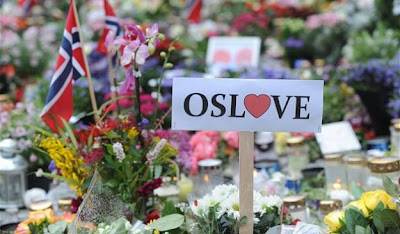 It was one week ago today that the word "evil" began to be used in media coverage and political discourse without appearing to be an exaggeration or hyperbole because it was not. The July 22, 2011 terror attacks that claimed at least 77 lives and injured at least another 96 in downtown Oslo and the nearby island Utøya where Labor Party youth were gathered.The bulk of the deaths where children and adolescents on the island. The first funerals were held today in Oslo for the 77 killed in the July 22nd attacks.

Then the following Monday, July 25, 2011 the people of Norway demonstrated their profound rejection and defiance of terrorism embracing courage and love marched through the streets of Norway with roses held high in their hands in remembrance of those who had been killed. It came to be known as The Rose March.


Tomorrow Saturday, July 30 at 2:00pm rain or shine I will join together with other people of good will, be it 2 or 3 of us to deposit red and white roses at the Torch of Friendship in remembrance of those killed on July 22nd in Norway and in solidarity with the good people of Norway who took to the streets in defiance of the fear that terror seeks to impose.


The song in the videos above Til Ungdommen ( in English: To our youth) before being set to music was first a poem published in 1936 by a Norwegian poet and writer who died fighting the Nazis during WWII.

Til Ungdommen (To our youth)

Surrounded by enemies,
go into your time!
Within a bloody storm -
devote yourself to fight!

Maybe you ask in fear,
uncovered, open:
with what shall I fight

the belief in our life,
the worth of mankind.

For all our future's sake,
seek it and cultivate it,
die if you must - but:
increase it and strengthen it!

Silently rolls the grenades'
conveyor belts
Stop their drift towards death
Stop them with spirit!

War is contempt for life.
Peace is to create.
Throw your strength into it:
Death shall lose!

Love and enrich with dreams
all that was great!
Go towards the unknown
wring answers out of it.

Noble is mankind,
the earth is rich!
If there is need and hunger
it is by deceit.

Crush it! In the name of life
injustice shall fall.
Sunshine and bread and mind
belongs to all.

Then the weapons sink
powerless to the ground!
By creating human worth
we create peace.

Those who with their right arm
carry a burden,
precious and inalienable,
cannot murder.

This is our promise
from brother to brother:
We will be good to
humanity's earth.

We will take care of
the beauty, the warmth
as if we carried a child
carefully in our arms!

Email ThisBlogThis!Share to TwitterShare to FacebookShare to Pinterest
Labels: Norway, rose, terrorist attacks, Til Ungdommen (To our youth)