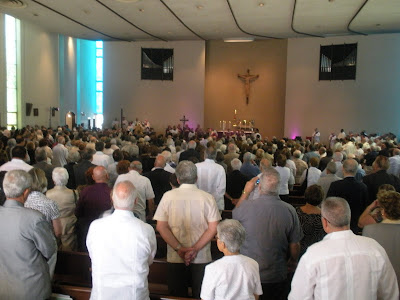 Wake for Archbishop of Santiago de Cuba Emeritus Monsignor Pedro Meurice Estiú held at Our Lady of Charity over the weekend ended on Sunday night at 10pm. A Resurrection Mass was held for him officiated by Archbishop Thomas Wensky at 10:00am Monday, July 25 at St Michael Church 2987 West Flagler Street. The Miami Herald reported that 11 bishops, 70 priests and 1,200 faithful attended the Mass. Videos and images below: 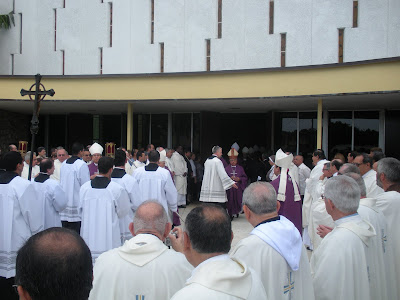 Member of the Felix Varela Foundation at Our Lady of Charity speaks of the importance and legacy of Monsignor Pedro Meurice Estiú. 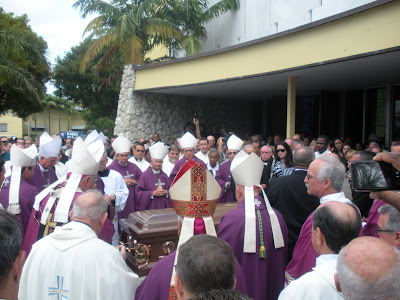 The Miami Herald reported that “Pedro Meurice suffered a lot just as any father would seeing his family divided,” Msgr. Dionisio García Ibáñez, current archbishop of Santiago de Cuba and president of Cuba’s Conference of Catholic Bishops, said in his homily. “But he was also very happy seeing that faith was strengthening and that Christ continued to be proclaimed.” 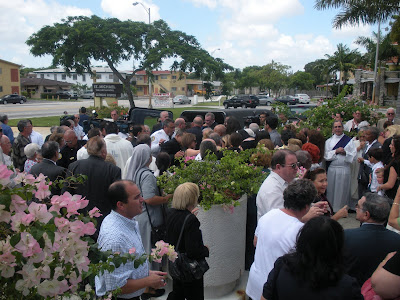 Archbishop Wenski said that "Death surprised him here in Miami, far from his beloved Santiago. He died as he lived: with a prayer in his lips, the Virgin by his side and Cuba in his heart.”

Cuban priests sang the Cuban national anthem at the end of the service at St. Michael Church. Rest in peace Father Pedro Meurice Estiú and please pray for us sinners on both sides of the Florida Straits.
Posted by John Suarez at 9:44 PM