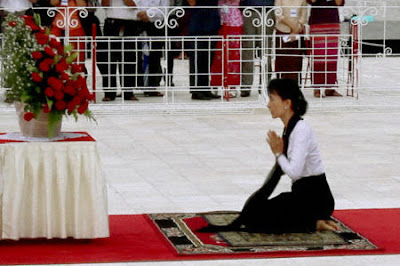 Aung San Suu Kyi after years as an Amnesty International prisoner of conscience in Burma was today able to honor her father's memory during Martyr's Day. Aung San was one of the Burmese leaders who achieved independence from Great Britain but were gunned down by a rival faction on July 19, 1947 just as the country was granted independence from Britain.

Aung San Suu Kyi leads hundreds of supporters in memorials for her father.
Burma's pro-democracy leader Aung San Suu Kyi led a march of 3,000 supporters on Tuesday, July 19, 2011 in honor of her late father. She then spoke a private gathering. Voice of America reported that "following the afternoon march, the National League for Democracy issued a statement urging the government to hold a meaningful dialogue with opposition groups and to release all political prisoners. "

After several years of house arrest, it was the first time in nine years that the 66-year-old Nobel Peace Laureate was able to take part in the Martyrs' Day commemoration at the Yangon mausoleum where her father's tomb is kept.