Please take a moment to sign for justice and against impunity: http://www.signforjustice.org/ 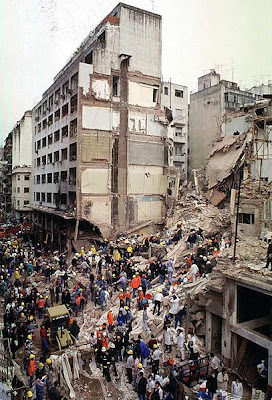 Remains of 7-story AMIA community centre following July 18 bombing
A siren sounded at the precise time the bomb exploded on July 18, 1994 at 9:53am (1253 GMT) and reduced the seven-story Jewish-Argentine Mutual Association (AMIA) community centre in Buenos Aires to rubble reported the BBC. 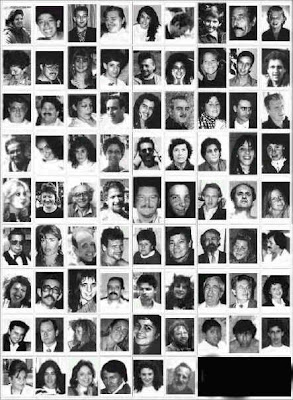 85 murder victims of July 18, 1994 terrorist attack in Buenos Aires
85 people were murdered and 300 hundred wounded. 17 years later those responsible for this act of terrorism remain at large. A movement to remember the victims of this horrendous crime has organized both to remember and demand justice.

Thanks to the youtube account of http://www.youtube.com/user/85vidasmenos have been able to post video clips of the movie "18-J" and public announcements to denounce this crime and remember those who lost their lives and hear from their loved ones.

As the years have passed the acts of remembrance continue not only in Argentina but around the world. 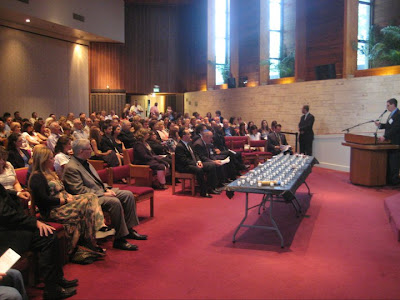 It was on the morning of July 18, 1994, that a car, filled with explosives, bombed the AMIA Jewish Community Center in Buenos Aires. The explosion left 85 dead and 300 others wounded. It was the deadliest terrorist attack ever in Argentina's history and happened only two years after the 1992 bombing of the Israeli embassy in Buenos Aires.

On Monday, the victims of the attack will be remembered and honored at a memorial service at 7 p.m. at Temple Sinai, 18801 NE 22nd Ave. in North Miami Beach. The speakers will include: Ofer Bavly, consul general of Israel; Miguel Talento, consul general of Argentina, and Juan M. Dircie associate director of the American Jewish Committee's Latino and Latin American Institute-Miami. There will also be a special screening of scenes from the movie "18-J," a collection of short personal and communal stories of victims of the attack.

In addition in 2011 Argentine filmmaker Marcos Carnevale released the film Anita about the July 18, 1994 terrorist attack. Carnevale tell this story through the eyes of a young Jewish woman with Down syndrome named Anita. The film is now being shown in Miami at the Tower Theater and will be shown at the Cosford Cinema on July 29.

This horrid crime took place just five days after another act of terrorism against 37 innocents trying to flee to freedom from Cuba. Shocked by another brutal act so soon afterwards in our Latin America. Living in Miami, Florida with both large Cuban and Jewish communities the reverberations of both these crimes were and continue to be deeply felt.

17 years have passed since both crimes took place and in both cases justice has proven elusive nevertheless acts of remembrance continue as do demands for justice. In Latin America in places like Venezuela anti-semitism is on the rise and it needs to be denounced. Sadly, fears exist that President Kirchner's relationship with Chavez may be part of the reason behind her collaboration with the Iranians. This despite the fact that Argentines have long suspected that high-level Iranian diplomats were involved in the July 18 attack.

Leo Tolstoy once observed: "When will justice come? When those who are not injured become as indignant as those who are." Therefore please help the victims of AMIA bombing and demand justice for those who can no longer speak. Please sign this petition for justice: http://www.signforjustice.org/

"To remain neutral in situations of injustice is to be complicit in that injustice." - Desmond Tutu
Posted by John Suarez at 11:58 PM