The Rose March: Norway's courageous, defiant and loving example for the world

A rose does not need to preach. It simply spreads its fragrance. The fragrance is its own sermon. - Mohandas Gandhi 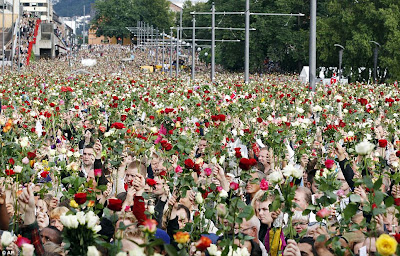 Norwegians with roses express their grief and unity
More than a 100,00 rallied today to express grief and unity for the victims of terror attacks in Oslo and Utøya that took place on Friday, July 22, 2011. Some reports place the number of participants at 150,000 alone in Oslo. Poignant videos have appeared on youtube with images and music such as Norwegian musician Maria Mena's Mitt lille land and she is also offering the song as a free download.

Maria Mena's Mitt lille land
The Canberra Times reported that the Norwegian Prime Minister addressed the evening crowd, many holding up the red and white roses for remembrance: "By taking part you are saying a resounding 'yes' to democracy." He called the Rose March a "march for democracy, a march for tolerance, a march for unity. Evil can kill a person but never conquer a people."

The BBC reported that Crown Prince Haakon told more than 100,000 people in Oslo that "tonight the streets are filled with love". 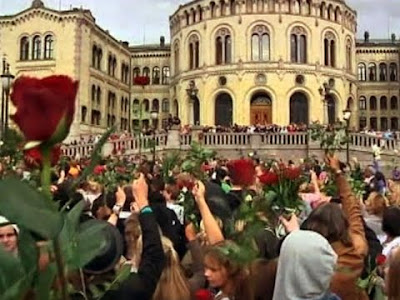 Norwegians gather at Parliament in downtown Oslo with Roses

Norway has demonstrated once again the courage and decency of its people in confronting terror with defiance and dignity in this silent protest against hatred and terror. Writing from Miami, Florida a long ways from the streets of Oslo can only say that I was present in spirit and pray and offer my condolences for those who have died, were injured and their loved ones and countrymen who are going through this difficult time with such grace and dignity. It is an example that the world would do well to follow closely and learn from.