Scenes and Sounds from Tahrir Square 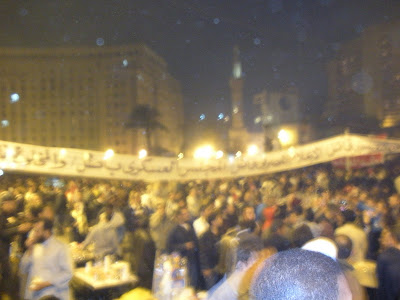 Before walking into the Square you had to pass through a security checkpoint that searched your bags and checked identification. The organizers of the demonstration have set up internal policing mechanisms in an effort to maintain some level of order in Tahrir Square. 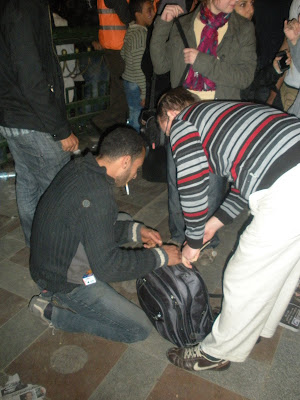 Checkpoint prior to entering Tahrir Square

Walking into the square surrounded by hundreds of thousands of Egyptians engaged in discussion and debate about the future of their country.

Walking into Tahrir Square after passing through the checkpoint fireworks overhead

Banners, posters with images of martyrs, prisoners and slogans abound. At the same time merchants selling food, juice, popcorn, gas masks and more. For example, balloons imitating the “I Love NY” campaign replacing NY with Egypt raised the ire of some of the activists who exclaimed: “People are being killed just a few feet away from these guys selling balloons.” Its all a bit surreal. 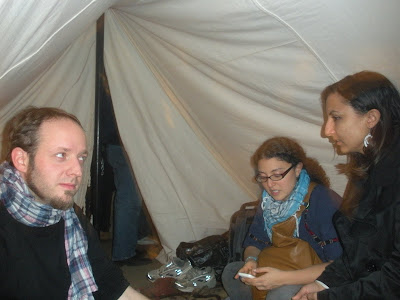 Fireworks exploding overhead and families walking through Tahrir Square with their children. There is a festive air in the Square as one approaches the tents at the center.

The nerve center of the Tahrir Square protests were organizers and politicians gather to talk. Food and banana juice are passed around the tent. Introductions are made and international visitors get a briefing on what is going on. 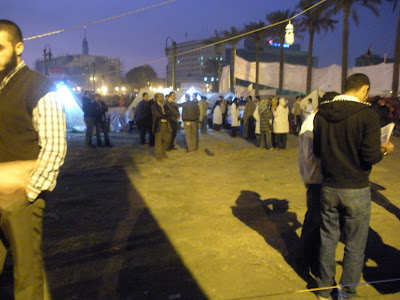 On Friday night between the Parliament building and the Prime Minister's office demonstrators set up their tents and expanded the demonstration. Chanting anti-military slogans and calling for the transfer of military rule to civilian rule. 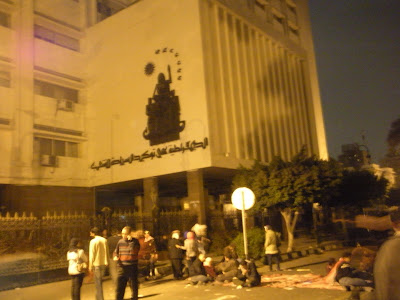 At any moment shots can ring out and chaos ensues. Usually it happens late at night but on Saturday it happened in the morning, but this time a young demonstrator was run over. Also outside of the Square the situation is also dangerous. During the first phase of the revolution in January, elements in the population seized weapons caches from the police. Now in many parts of Cairo shoot outs can take place at any time over a theft or an argument.

Their is great skepticism among many about the Parliamentary elections beginning on Monday. There have been a lot of last minute changes in electoral rules and procedures and as of Sunday night many questions still remain on how it will be run. At the same time news that supporters of different candidates got into shoot out raises deep concerns about how peaceful the elections will be.
Posted by John Suarez at 6:12 AM