Learn how to end tyranny without a blood bath 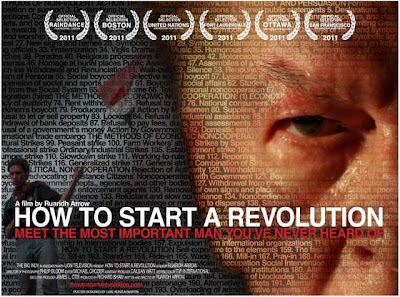 Gene Sharp founded the Albert Einstein Institution in 1983. Since its founding the institution has been and remains "dedicated to advancing the study and use of strategic nonviolent action in conflicts throughout the world. It is committed to the defense of freedom, democracy, and the reduction of political violence through the use of nonviolent action." Professor Sharp has been described as the Machiavelli of nonviolence.

Now through film, How to Start a Revolution, the world has an opportunity to learn about this man and his work. The world premiere was in Boston on September 18. There is a one time opportunity to see this film in South Florida. How to Start a Revolution, a documentary about non-violent strategic theoretician Gene Sharp premieres in South Florida at the Fort Lauderdale Film Festival on Wednesday, November 9 at 5:30pm at Cinema Paradiso. Its in the middle of the week at a horrible time but it is worthwhile to do what you can to attend.

The Notes from the Cuban Exile Quarter blog has been online since August 23, 2009 and has already referenced Dr. Sharp on several occasions. The author of this blog back in June 14-15, 1996 spent two days in a training led by Gene Sharp in Miami, Florida at Florida International University that was sponsored by Brothers to the Rescue. Sharp gave a presentation on how to face dictatorship's realistically. It was a life changing experience.

Gene Sharp is now 83 years old and his physical movement is limited but the strategic nonviolent vision, strategy and tactics that he has spent a life time teaching and writing about is on the march around the world. It is an alternative to violent wars that minimizes the human cost in confronting tyrants and despots around the world.

If you want to learn how to change the world without a blood bath then you should run to see this film and read as many of Gene Sharp's books as you can get your hands on.

Email ThisBlogThis!Share to TwitterShare to FacebookShare to Pinterest
Labels: Albert Einstein Institution, Gene Sharp, How to Start a Revolution, Nonviolence