Returning to Forum 2000 four years after being a delegate in 2009 is a bittersweet affair. Bitter because the founder, Václav Havel is no longer with us and the years of unjust imprisonment under the communist regime shortened what still managed to be a long and fulfilling life. Its a bit selfish on my part because one knows that he lived a fully integrated life and was that rarest of things a great and good man. However, the absence of his moral authority and courage is sorely felt around the world. World politics is diminished by his absence. It is also bitter because of the passing of Oldřich Černý in 2012 the first Executive Director of Forum 2000 at the age of 65.

However it is also, sweet because despite these profound losses Forum 2000 continues and in 2013 counts with the presence of His Holiness the Dalai Lama, and Aung San Suu Kyi who both were championed by Havel until his final days. Folk singer Joan Baez who 50 years ago this year sang her songs of freedom for Martin Luther King Jr. as the Civil Rights Movement marched on Washington D.C. to guarantee voting rights for African Americans was there to celebrate the presence of Aung San Suu Kyi with song and later took part in a panel on civil society. Belarusian, Burmese, Chinese, Cuban, Ecuadorian, Egyptian, Venezuelan dissidents, former heads of state, philanthropists and intellectuals gathered to talk about the situations in their respective struggles and to exchange views. On Tuesday morning at 8:00am a working breakfast on "Challenges for Democracy in Latin America" will be held followed at 3:00pm with a panel that explores "Venezuela, Cuba: What Lies Ahead?" 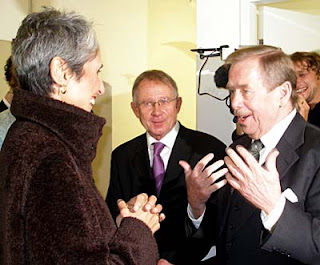 A conservative intellectual heavyweight, Roger Scruton, was also present to weigh in on important matters globally in the panel on "Trust, the State, and the Rule of Law" and on Tuesday morning at 10:30am will look at the local in a panel on "Transforming Cities: Towards Smart Forms of Governance?"

Luckily, the conference is being recorded and placed on the web because a number of these important conversations are being held simultaneously at different venues in Prague and elsewhere in the Czech and Slovak Republics. It is available for thinking people around the world to engage in this important conversation about the future of our civilization.

Beyond the important achievement of creating a space of open dialogue for differing views to look at the world's problems there is also the generous spirit of the Forum that through first hand experience can be described as warm and embracing with a sense of humor. Friends, who although perhaps not in agreement meet in an atmosphere of respect to explore their differences and in doing so learn more about themselves and the other. It is a Havelian spirit.

Unfortunately, in today's news climate were trivia and distraction are often front page news, events such as Forum 2000 are poorly covered when one considers the importance of what is taking place here. 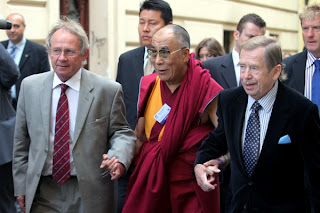 My commitment to this initiative of Havel and Černý remains firm and hope that others will take it upon themselves, both citizens and policy makers to join the conversation thinking about the long term and about the common good.

It is what both Václav Havel and Oldřich Černý did until their dying days. Their example should inspires others and make the world a better place over the long term. The bottom line is that with the freedom found in living in truth comes the responsibility to do what you can to make this world a better place for the next generation. During the current Forum 2000 Conference: Societies in Transition it was said that the Czech transition is still underway after more than twenty years. The preservation and expansion of freedom is ongoing process that must be affirmed and defended. In a real sense every country is in the process of transition. The difficult question one must ask: Is the society undergoing a transition to more or less freedom and decency?

Please consider becoming a friend of Forum 2000 with concrete and regular support by following Forum 2000 on Twitter, watching the remaining Forum 2000 events on September 17 and 18th, and letting others know about this treasure trove of accumulated wisdom that is just one of the many positive legacies of  Václav Havel and Oldřich Černý.

One side note walking into the top gallery of the Prague Crossroads prior to the Opening Ceremony and seeing a broken heart suspended on the far wall brought back the feelings of loss and mourning for a great friend of oppressed peoples around the globe. However, with the continuing existence of Forum 2000 it can be affirmed that the heart, although battered by the loss of a friend continues to beat on. 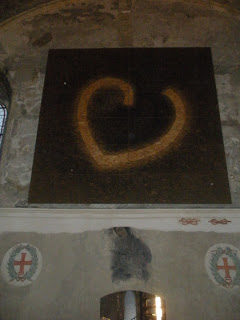