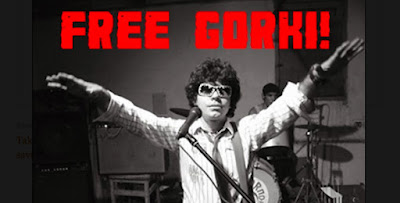 According to the blog Notes from the Cuban Exile Quarter, Gorki faces a 10 year prison sentence for his political lyrics, though the official charges are on possession of drugs.

“Looking at the details, the government’s case falls apart,” wrote John Suarez: “Gorki is an epileptic and a doctor has prescribed medication. All of this is backed up by the prescription itself and the notarized letter by the physician. Unfortunately, in Cuba a fair trial is an impossibility but international attention and pressure can still save the day. Below is a video from Gorki explaining the need for solidarity and the danger that he faces. The video is in Spanish but beneath it is an English translation of what he is saying.”

Published on youtube.com on 4 February 2014

Gorki: “…I have been an opponent of the regime for a long time. They don’t miss the opportunity to try link us and discredit us in common crimes in order to silence us in some way. They are going to hold a trial on the 11th of February at 8:30am in Marianao in the hall of a trial. It is a summary trial. It is a trial that I believe is profoundly unjust because the defense does not have access to the case files of the prosecution. These types of trials are customarily done in totalitarian countries. They are extremely fast trials done in a series and are fabricated and decided beforehand. That’s why I appeal to all who want to show their solidarity because this can be very dangerous for me since they always want to find ways to jail me…”

Excerpt. Translation by Notes from the Cuban Exile Quarter


Petition to the Minister of Justice in Cuba, Maria Esther Reus González

“The idea of silencing a man whose only crime is free expression and writing songs which lyrics are against the government is savage and unacceptable.
Hereby I call Maria Esther Reus Gonzalez, the Minister of Justice in Cuba to withdraw those absurd charges against Gorki Luis Aguila Carrasco and return him his freedom. I demand from Cuban authorities the respect of Gorki’s right to treat his disease and his basic human rights.”

» Cuban Exile Quarter – 5 February 2014:
Take two minutes during the Amnesty Concert and save a Cuban musician

» Profile of Gorki on Wikipedia, the open encyclopedia:
wikipedia.org/wiki/Gorki_Águila