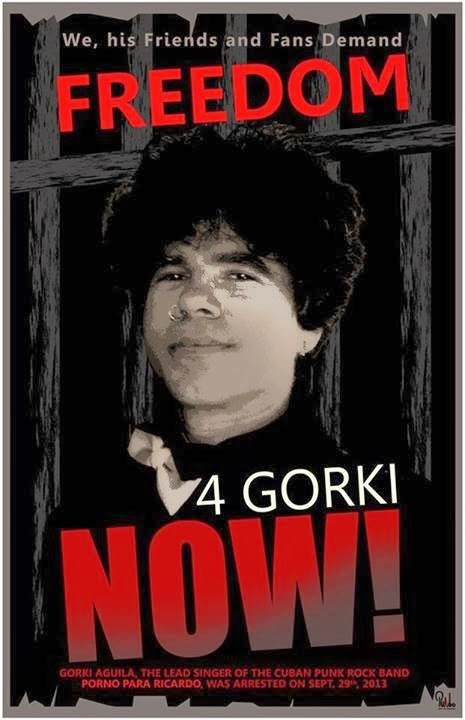 On September 30, 2013 agents of the Castro regime arrested Gorki Luis Aguila Carrasco and confiscated medication prescribed to him by a Mexican doctor for epilepsy that the Cuban punk rocker has suffered with since childhood. In a Cubanet interview on October 16, 2013 Gorki explained his situation: "I don't know what they accuse me of, nor do I have a trial date." That has now changed. On a citation for summary judgement dated January 27, 2014 Gorki is called to attend a summary trial on February 11, 2014 where he will stand as the accused. Under the rules of the game of the Castro regime he is already guilty. It is up to all of us to campaign for his freedom.

Citation for summary judgement...one of the many planned injustices of the regime .... For February 11 in the summary hall of Marianao.

The regime in a "prudent" way waited for the CELAC event to end in order not to have the discomfort of a media frenzy as it did in 2008.

He has been jailed at different times for hours, days and years. In 2003 the dictatorship accused him of drug trafficking and sentenced him to four years in prison but at his summary trial no evidence was presented to back up the charges of the political police. Gorki is not a drug trafficker.

Free Muse an independent international membership organization founded in 1998 that advocates and defends freedom of expression for musicians and composers worldwide took up Gorki's plight and campaigned for his freedom. In 2008 they saved him from years in prison under the charge of social dangerousness.

They failed to imprison him in 2008 with the dangerousness charge and have manufactured once again the drug trafficking charge used against him in 2003 and this time are using the posession of medicine prescribed by a doctor for his epilepsy. Below is a copy of the prescription and a notarized affidavit from the doctor confirming its validity.

In Castro's totalitarian Cuba there is no such thing as a free and independent trial. Gorki's guilt and the length of his imprisonment will only be determined by the political calculations of the dictatorship. Its up to people of good will around the world to give a shout out for Gorki in order to save him again as was done in 2008.

There is a petition online by Aleksandra P. from Poland on Avaaz for the freedom of Gorki below is the text in English:

On Saturday, September 30th police officers arrested Gorki Aguila. He has been suffering from epilepsy since he was a child and had with him two pills of the medication for his disease. He has documents which prove that those medications were prescribed by a Mexican doctor. The authorities want to bring him to trial for the possession of controlled drugs in Cuba.The idea of silencing a man whose only crime is free expression and writing songs which lyrics are against the government is savage and unacceptable. Hereby I call Maria Esther Reus Gonzalez, the Minister of Justice in Cuba to withdraw those absurd charges against Gorki Luis Aguila Carrasco and return him his freedom. I demand from Cuban authorities the respect of Gorki’s right to treat his disease and his basic human rights.

Please sign the petition and get the word out on Gorki's plight. Help save a life.

Below one of the videos that upset the dictatorship and have led this Cuban musician to be unjustly imprisoned in the past and targeted again now.