Venezuela: Repression and Death versus Freedom and Life

Today marks two weeks since the Youth Day in Venezuela began on February 12 sparking a series of nonviolent demonstrations that were met with deadly force by President Maduro's security forces and paramilitaries. The response to Maduro's repression has been two weeks of massive protests across the country. Maduros and his Cuban allies have responded by escalating repression by what has now revealed itself to be for all purposes to be a dictatorship operating in Venezuela. Alessandra Solini who produced a video explaining the reasons for the protests on February 16, 2014 has produced another video showing compelling images of what is taking place across Venezuela which is embedded below.

Opposition leader, Leopoldo Lopez, unjustly jailed on February 18th continues imprisoned and is a prisoner of conscience. His wife  Lilian Tintori and a National Assembly Deputy, María Corina Machado, are calling on "mothers, grandmothers, and sisters" at 10:00am today February 26, 2014 to protest in the streets of Venezuela "for the fallen, the tortured, for the prisoners" under the name "women for LIFE" asking women to dress in white and to march silently with white flowers.

The number of deaths, and equally disturbing the number of students who are being disappeared, are escalating. The picture below has the names and images of nine of the victims of the Maduro regime's brutality but the number of known murder victims is now at 16 as of five hours ago. 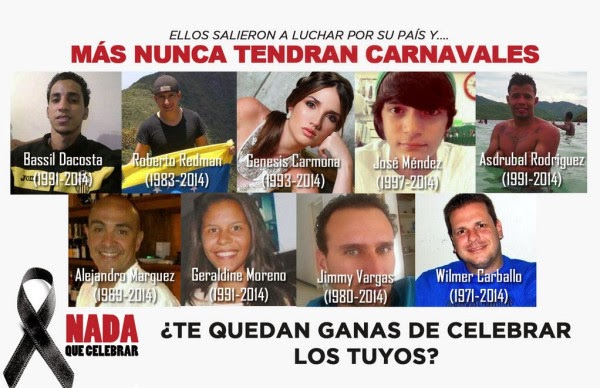 Meanwhile in Cuba activists have taken to the streets in solidarity with their Venezuelan counterparts and have been subjected to threats, brutal beatings, and detentions. Last week Cubans and Venezuelans came together in Miami announcing a coalition.

Today will have the women of Venezuela in my thoughts as ten in the morning approaches and they begin their silent protest dressed in white carrying white flowers. The tactics of repression of the Castro regime are duplicated in Venezuela by Maduro but also the democratic opposition, in this case women dressed in white silently carrying white flowers demanding an end to repression, are following a path laid down by Cuba's Ladies in White.

Prayers and solidarity for the student movement in Venezuela seeking to be the authors of their destiny and to rescue their country from the totalitarian abyss and to the women of Venezuela who are demanding an end to repression and risking their own lives in the process.

The choice is clear in Venezuela: Maduro government offers violence, repression and death versus a student movement nonviolently fighting for freedom and life.

What is taking place in Venezuela is an example of civic courage that will be remembered through the ages.