José Antonio Echeverría and The legacy of the "13 de Marzo"

Fifty seven years ago today in the afternoon, a group of young men took up arms and charged into the presidential palace in Havana to assassinate the Cuban dictator, Fulgencio Batista, and were all gunned down. Nearby at the same time in Radio Reloj not knowing that the assault had failed student leader José Antonio Echeverría declared the dictator dead only to be himself killed in a skirmish after leaving the radio station. It was described as the day that Cuba lost its future. 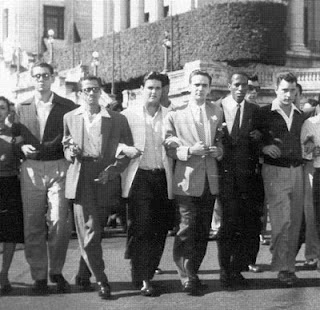 More than a half century later both sides in the ongoing struggle declare José Antonio Echeverría as one of their own. However, his democratic credentials and history as an elected student leader and practicing catholic would place him at odds with the Castro dictatorship.

Nevertheless, the legacy of the "13 de Marzo" action to overthrow Fulgencio Batista by violent means ended with the deaths of many good and brave Cuban democrats, José Antonio among them, opening the way for Fidel Castro and in hindsight can be seen to have been a disastrous idea.

The exercise of violence always has a destructive effect on human relationships even when, as sometimes happens, it accomplishes some short-term goal. The exercise of nonviolence, or Satyagraha, always brings people closer. This explains why Gandhi, after fifty years of experimentation in every walk of life, could declare that he “knew of no single case in which it had failed.” Where it seemed to fail he concluded that he or the other satyagrahis had in some way failed to live up to its steep challenge.  Taking the long view, he was able to declare that “There is no such thing as defeat in non-violence. The end of violence is surest defeat.”

Unfortunately, the "13 de Marzo" also has another and related significance in Cuban history. Twenty years ago this upcoming July 13, 1994 a tugboat named "13 de Marzo", in honor of that violent anniversary, carrying Cuban families seeking to flee the Castro dictatorship, that replaced Fulgencio Batista in 1959, was attacked by agents of the current dictatorship and 37 were killed among them 10 children.
Hopefully the student movement in Venezuela will learn from this historic mistake by Cuban university students and maintain their nonviolent resistance to the Maduro regime.