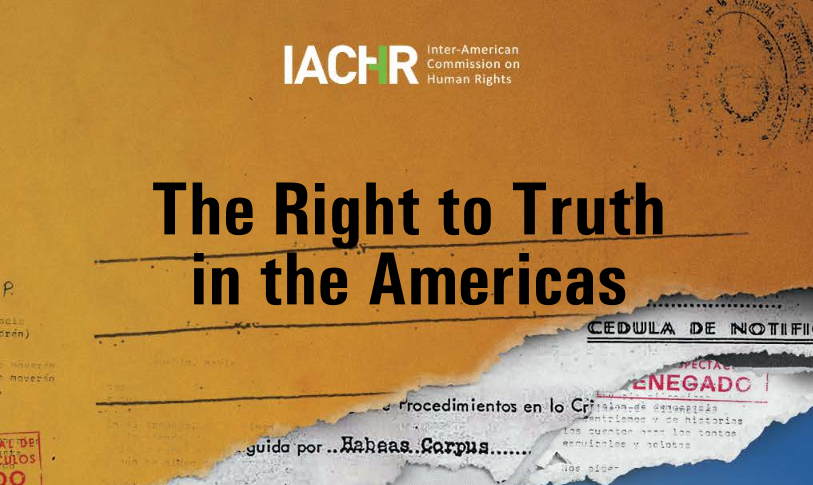 Washington, D.C. - On the occasion of the International Day for the Right to the Truth Concerning Gross Human Rights Violations and for the Dignity of Victims, March 24th, the Inter-American Commission on Human Rights (IACHR) calls on the States of the Americas to respect and guarantee the right to the truth concerning grave human rights violations.

“The region’s democracies have inherited the responsibility of investigating human rights violations that occurred in times of dictatorships and authoritarian governments, and to punish those responsible,” said IACHR President Rose-Marie Antoine. “The path to truth and justice for these types of crimes of the past has been extremely long and difficult, but it is an outstanding obligation and a responsibility the States cannot avoid. It is impossible to build a democratic future without first shedding light on the grave violations of the past and achieving justice and reparation,” she added.

Investigations to identify and punish those responsible for the region’s serious human violations of the past have been seriously flawed. For example, some States continue to apply the military criminal justice system, and there are still amnesty laws in effect, known by different names, which ensure that these crimes remain unpunished. In many cases, there are major obstacles or it is even impossible to gain access to information about what transpired. In some countries, the concealment of extrajudicial executions, forced disappearances, acts of torture, and sexual violence, along with other serious human rights violations, was a deliberate State policy and even a tactic of war. There has been important and significant progress in many areas and across different countries. However, gaining access to the full record of what transpired continues to be a major challenge.

The right to truth has two dimensions. The first is that victims and their family members have the right to know the truth and the identity of those who played a role in the violations, which means that States must investigate the facts, prosecute and punish those responsible, and guarantee access to the information available in State facilities and files. Secondly, society as a whole has the right to know the truth about past events, as well as the motives and circumstances in which the crimes were committed, in order to prevent recurrence of such acts in the future.

Consequently, the right to the truth should be a priority on States’ agendas. This means carrying out reforms or adopting legislative, judicial, and practical measures that recognize the rights of victims and their family members to know the truth about what happened, as well as ensuring access to information available in State facilities and files concerning serious human rights violations.

“States should declassify all documents that could be of use in judicial investigations, and in the case of serious human rights violations in a transnational or regional context, States should cooperate in turning over official information to other States seeking to investigate, prosecute, and punish such violations,” the IACHR President said.

In November of last year, the IACHR published the report “The Right to Truth in the Americas,” which provides tools for States that seek to guarantee the right to truth. The report identifies positive contributions in close to ten countries made by victims, family members, human rights defenders, and civil society organizations to document, verify, and spread the truth about human rights violations.

Such efforts include establishing unofficial truth commissions, conducting investigations, preparing studies and reports, and implementing initiatives to bring pressure to bear for these violations to be recognized by society and the public.

“This report provides a useful guide for the States by compiling the case law of the inter-American system on what their obligations are with regard to justice and reparation for victims of grave human rights violations and society as a whole, in order to guarantee the right to the truth,” the IACHR President said.

Email ThisBlogThis!Share to TwitterShare to FacebookShare to Pinterest
Labels: Archbishop Oscar Romero, IACHR, International Day for the Right to the Truth concerning Gross Human Rights Violations and for the Dignity of Victims, OAS