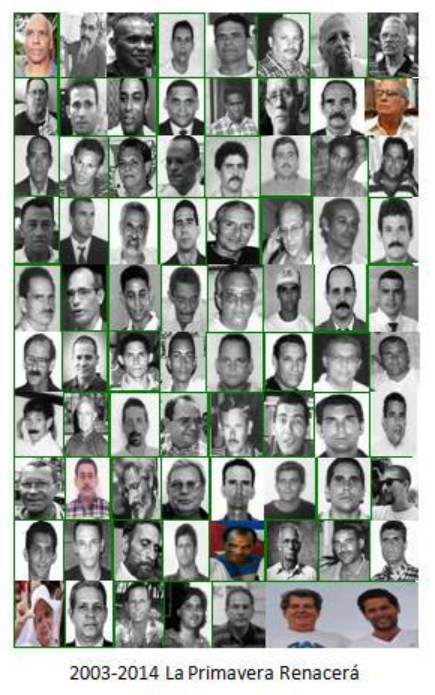 Twelve years ago today the Castro regime engaged in a nationwide crackdown on opposition activists followed by show trials and long prison sentences of up to 28 years for their nonviolent defense of human rights and freedoms. This was in reaction to 11,020 Cubans signing the Varela Project and demanding a referendum on human rights reforms. Alfredo Felipe Fuentes in a 2010 interview with Reporters Without Borders explained:


Of the 75 arrested, nearly 50 were people who had were of importance in the Varela Project. Although not all were in the "hard core", I mean among those who, like me, were responsible for the collection of signatures. The majority were actively involved. The 25 others were arrested to disguise that it was an operation against the national civic project.

The above image was posted over twitter by Regis Iglesias, one of the prisoners of conscience of the Cuban Black Spring and the spokesman of the Christian Liberation Movement in Europe. Today over Facebook he made the reflection:


The 2003 crackdown has not ended, from the first kidnapping on March 18th, passing through the years of prison, exile, and the sword of damocles hanging over those who stayed in the island under an extra-penal license", the "natural" or provoked deaths of Miguel Valdes, Orlando Zapata, Laura Pollan, Antonio Villareal, Oscar Espinosa Chepe, Oswaldo Paya and Harold Cepero, the lack of rights of the people that in the spring of 2002 was supported in the Varela project, only confirms one thing ( and were not inventing anything new): only the continuing demand of the recognition of popular sovereignty and the vote of Cubans for their rights barred by the terror regime that for than half a century we have suffered. Free Elections with guarantees, in atmosphere of respect and plurality. Now!!!

The dictatorship thought it had ended the democratic opposition but instead the Black Spring led to the formation of a new movement: The Ladies in White. Below is a documentary filmed before, during and after the crackdown that began on March 18, 2003.