A nonviolent moment that shook the dictatorship and exposed its repressive nature to the world. 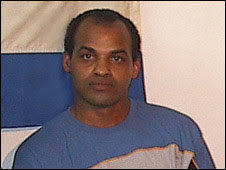 Orlando Zapata Tamayo
July 23, 2010 marks exactly 5-months since Cuban prisoner of conscience Orlando Zapata Tamayo died after 83 days on a water only hunger strike in which prison officials for more than two weeks denied him water in an effort to break his will and failed. He was protesting the systematic denial of human rights and horrible prison conditions which recently freed prisoners described as subhuman. On February 24, 2010 the New York Times reported on how Orlando Zapata's death had ignited protest actions, among them Guillermo Fariñas.

Five months later the dictatorship's smear campaign continues against Orlando but only succeeds in exposing its own reprehensible nature. The latest Mariel Castro, Raul Castro's daughter, interviewed in Der Spiegel on July 21, 2010 led the interviewer to correct her on the facts. recognition of what he has accomplished is being reported around the world. At first media focus was on the role of the Catholic Church and the Spanish foreign minister, but over time it has shifted especially when taking into account what has brought about the largest release of Cuban political prisoners since Pope John Paul II's 1998 visit. The role of the Ladies in White was highlighted in a previous posting and should not be underestimated. In the video below CNN describing the release of prisoners into exile Orlando Zapata Tamayo's hunger strike and death is referenced:

On July 22, 2010 the Chicago Reader published The Martyr and the Stool pigeon where the author Michael Miner described "Orlando Zapata Tamayo as Cuba's Bobby Sands" and a martyr. Although both men were willing to defend fundamental principles putting their own lives on the line there is a crucial difference between Orlando Zapata and Bobby Sands: Sands advocated political violence in an "armed revolution" and Zapata rejected it embracing nonviolence as practiced by Mohandas Gandhi and Martin Luther King Jr.

The facts about the kind of man he was can be gathered by information, provided by Amnesty International when declaring Orlando Zapata Tamayo a prisoner of conscience in January of 2004, described his history of activism as follows:

He has been arrested several times in the past. For example he was temporarily detained on 3 July 2002 and 28 October 2002. In November 2002 after taking part in a workshop on human rights in the central Havana park, José Martí, he and eight other government opponents were reportedly arrested and later released. He was also arrested on 6 December 2002 along with Oscar Elías Biscet, but was released on 8 March 2003.

Before moving on it is necessary to revisit Orlando's December 6, 2002 arrest. Amnesty in an earlier report offered more details on what happened:

On 6 December 2002 Oscar Elias Biscet González, president of the unofficial Fundación Lawton de Derechos Humanos, Lawton Human Rights Foundation, was detained with 16 other dissidents after they attempted to meet at a home in Havana to discuss human rights.(15) This meeting was reportedly part of an effort by Dr. Biscet to form a grassroots project for the promotion of human rights called "Friends of Human Rights." When police prevented them from entering the home, Oscar Biscet and the others reportedly sat down in the street in protest and uttered slogans such as "long live human rights" and "freedom for political prisoners." They were then arrested and taken to the Tenth Unit of the National Revolutionary Police,Décima Unidad de La Policía Nacional Revolucionaria (PNR), in Havana.

The attempts to smear Orlando Zapata Tamayo and the pro-democracy movement in general is part of a desperate attempt by the dictatorship to diminish the moral authority of the opposition. The regime understands its own shortcomings. Miner went on to describe, in the before mentioned article The Martyr and the Stool pigeon, one of the Cuban agents who infiltrated the dissident movement, Manuel David Orrio, as a "stool pigeon" explaining that this word is a close approximation of the Spanish word "chivato" and quoted The Chicago Tribune's Gary Marx's observation that Orrio seemed kind of "despicable" and "someone with no moral compass." The contrast between Cuban human rights activist and prisoner of conscience Orlando Zapata Tamayo and the snitch of a brutal dictatorship Manuel David Orrio could not be more stark as laid out in an article of an "alternative weekly."

Orlando Zapata Tamayo posthumously won an important nonviolent battle that along with the Ladies in White and the opposition in general placed the dictatorship on the defensive. It pressured the Castro brothers into the current round of releasing political prisoners. That is not just the opinion of the author of this article but the reported analysis of the BBC, the New York Times, The Guardian, AlJazeera, and many more cite Orlando Zapata Tamayo by name as a major factor leading to the prisoners release.

The MettaCenter reproduces the definition originated by Yehudhah Mirsky of a nonviolent moment:

[A] climactic event in a campaign when all of the resistors’ forces are pitted against all of the oppressor’s forces in an open confrontation. The oppressor has two choices: escalate the oppression in a way that is repugnant to the rest of humanity, or back down and concede. Historical examples include the Dharasana Salt Raid during India’s anti-colonial struggle, the EDSA confrontation during the Philippines People Power movement, and Dr. King’s Selma march. Whether or not a nonviolent moment succeeds depends on numerous factors, some of which can be learned and practiced, such as the strategic efficacy of the resistors. However, not all factors are controllable and sometimes you can miscalculate, as in the Tiananmen Square massacre.

The Cuban dictatorship was faced in early 2010 with two nonviolent moments where it decided to ignore international opinion and escalated its brutality. One was to deny Orlando Zapata Tamayo water during his water only hunger strike and refuse to meet his demands leading to his death and the second was a month later when the regime organized mobs that beat up Cuban women seeking to march peacefully to demand their loved one's freedom.

Five months later the dictatorship is refusing to allow Reina Luisa Tamayo Danger, Orlando Zapata Tamayo's mother, to attend Mass and peacefully march in remembrance of her son and has resorted to acts of repudiation and violence. Yesterday, Reina was able to text blogger Yoani Sanchez the following message which Yoani tweeted on her account:

YOANI I INFORM YOU THAT SINCE TODAY AT EARLY HOUR BEEN UNDER SIEGE BY STATE SECURITY & PNR CARIDAD CABALLERO WAS ARRESTED & BEATEN & MARI BLANCA IS MISSING, WE LOVE YOU #OZT FAMILY

If this escalates , and the opposition is able to maintain its nonviolent discipline, then another nonviolent moment may emerge where the regime either escalates repression that will generate international and national repugnance or back down.

However, just because the regime has lost a battle does not mean that it will not seek to recoup its losses and maintain power. That is to be expected, and the opposition in the island and friends of freedom everywhere need to be prepared for the next battles in the ongoing struggle for fundamental human rights and freedoms to be restored and respected in Cuba. Nevertheless Alvaro Vargas Llosa is correct when he observes that: "The Black Spring heroes and their Ladies in White have revealed to us, against all odds, that the Castros are not invincible. "

Thank you Orlando Zapata Tamayo. My prayers and thoughts are with you and your family especially today.

Update: This afternoon learned that despite increased repression, detentions and death threats Reina Luisa Tamayo Danger was able, along with about twenty others, to march from her home to the cemetary in Banes, Cuba where her son is buried and honor her son's memory. Audio above provided by the Cuban Democratic Directorate.
Posted by John Suarez at 1:54 AM